Equine Seminal Plasma: The Good, The Bad and The Ugly 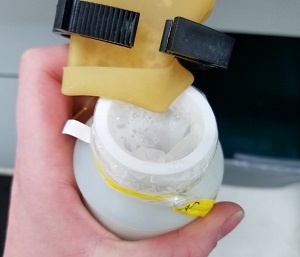 To understand why seminal plasma is beneficial in some situations and potentially harmful in others we must first review what it is, where it comes from and what we think are its roles in reproduction. The term seminal plasma refers to the fluid portion of ejaculated semen in which the spermatozoa are suspended. This fluid consists of secretions from the accessory sex glands in the stallion’s reproductive tract. These include the ampullae, the vesicular glands (seminal vesicles), the prostate gland and the bulbourethral glands (figure 1).

Stallion semen is ejaculated in a series of 4-7 pulsatile “jets” or fractions. Some of the fractions are sperm-rich and some are sperm-poor. When stimulated, sometimes while washing or before mounting, a stallion will typically emit one or more sperm-poor fractions of clear watery fluid comprised mainly of secretions from the prostate or bulbourethral glands. This is often referred to as “pre-sperm” and may or may not be immediately followed by complete ejaculation. The next 2-3 jets are the sperm-rich fractions which contain the vast majority of the sperm and fluid primarily from the testes, epididymides and ampullae. The remaining jets contain few sperm and are comprised mainly of secretions from the prostate and seminal vesicles. The seminal vesicle secretions can often be thick and gelatinous in nature (gel-fraction) and are typically filtered from the semen during the collection process with an artificial vagina. Alternatively, this gel fraction can be avoided completely by collecting a fractionated ejaculate. Additional information about this procedure can be found in our article, Collecting a Fractionated Stallion Ejaculate.

For Him – The Good During ejaculation, the sperm are also mixed with fluids from the accessory sex glands and then uterine fluids in the mare. In addition to providing a vehicle for sperm transport, seminal plasma proteins may play important roles in stabilizing sperm membranes, protecting sperm from the mare’s immune system and binding to the oocyte.

For Him - The Bad

In certain cases, seminal plasma from some stallions can be somewhat toxic to its own sperm. This does seem counterintuitive but consider the difference between what happens with sperm during natural mating and what happens when semen is collected with an artificial vagina for AI. During natural mating, because of the pulsatile nature of ejaculation, sperm in the early sperm rich fractions are exposed to the uterine environment before mixing with much of the seminal plasma contributed by the accessory sex glands. When semen is collected in an artificial vagina, all the fractions of the ejaculate mix and are incubated while the semen is evaluated and processed for preservation or AI. This intervention in the natural sequence of events results in sperm being incubated for prolonged periods in seminal plasma, a situation that does not occur in natural mating. It may be that in natural mating situations the uterine environment offers protection from potentially harmful effects of certain seminal plasma components. Collecting semen directly into an appropriate extender by placing pre-warmed extender into the collection vessel can often prevent the damaging effects of toxic seminal plasma in these stallions because the early sperm-rich fractions get diluted by the extender prior to prolonged exposure to harmful components of seminal plasma.

Prolonged exposure to large amounts of seminal plasma are detrimental to sperm during storage, either cooled or frozen. Therefore, it is critical for successful cooled preservation that the semen is diluted a minimum of 3 parts of an appropriate extender to 1 part of semen or that seminal plasma is removed or greatly reduced by centrifugation. The extender is diluting out the potential toxic effects of the seminal plasma. Furthermore, it is standard practice for all cryopreservation protocols that nearly all the seminal plasma is removed by centrifugation or filtration prior to freezing to maximize sperm survival during the freeze-thaw process.

For years, breeders and many practitioners believed that mares inseminated with frozen semen had a profound reaction resulting in pronounced uterine fluid accumulation and endometritis. For some time, it was thought that this was an allergic reaction to frozen semen extender components such as egg yolk or glycerol. All mares, whether bred naturally or AI with fresh, cooled or frozen semen experience a post-mating inflammatory process which is a normal physiological reaction that serves to clear the uterus of excess sperm and bacterial contaminants. Both sperm and bacteria cause this uterine inflammatory reaction and it is transient in normal mares, clearing the uterine environment in 24-48 hours. Following mating or AI, sperm are propelled rapidly to the tip of the uterine horns aided by uterine contractions where the utero-tubal junction between the uterus and oviduct serves an important function to filter out abnormal sperm and selectively admit sperm that have normal motility and morphology and likely possess certain surface proteins. Within 30 minutes of insemination, sperm can be found in the oviducts of most mares and by 4 hours post-breeding, transport of sperm from the uterus to the oviduct is completed. The post-mating inflammatory response begins in 30 minutes and is characterized by a rapid influx of neutrophils that phagocytose spermatozoa and bacteria. Prostaglandins are also released from activated neutrophils and cause myometrial contractions. In normal mares, these contractions aid in the physical expulsion of fluid, sperm and contaminants from the uterus through an open, relaxed cervix and then the reaction subsides. Troedsson’s group demonstrated that seminal plasma plays a critical role in modulating the duration of this inflammatory response. Furthermore, it was found that certain seminal plasma proteins can selectively protect live sperm from neutrophil binding and phagocytosis while promoting the active elimination of dead sperm.  For additional information see our article, The Facts about Frozen Semen and Post Breeding Uterine Fluid or our FAQ section.

A certain population of “susceptible” mares will not eliminate fluid from the uterus following the normal physiological inflammatory response that follows mating. These mares develop a condition known as persistent breeding-induced endometritis. This condition is often seen in older maiden mares that have some degree of cervical dysfunction that prevents complete relaxation of the cervix and impairs the physical expulsion of fluid from the uterus. Oxytocin and/or uterine lavage therapy 4-8 hours after breeding can be used to aid in elimination of fluid in these cases. Dr. Dave Scofield explains the uses of oxytocin in his article, Oxytocin Use in the Mare.

If there is delayed uterine clearance of fluid in mares bred with frozen semen it is more likely because in most cryopreservation protocols nearly all the seminal plasma is removed when the sperm are concentrated by centrifugation. It is not clear as to how much seminal plasma is required to provide the beneficial effects on inflammatory response mediation in the mare but some data suggests that as little as 5% seminal plasma is sufficient. Many protocols, including those used by SBS labs, specify retaining 5% seminal plasma in the extended semen prior to freezing. In a multicenter retrospective study published by SBS Labs the incidence of significant retained uterine fluid in mares inseminated with frozen semen was not significantly higher than mares inseminated with cooled semen. It is therefore important to monitor all mares 12 to 24 hours after insemination with any type of semen for delayed uterine clearance of fluid. Treatment can then be initiated if indicated so that the uterus is free of all fluid and in the appropriate condition to provide a suitable environment for the embryo to enter on day five.

So, what is The Ugly?

If you have worked very much collecting stallions, you know that those who produce large volumes of gelatinous or viscous fluid from the seminal vesicles (gel fraction) can be extremely difficult to manage. Fortunately, there does not seem to be any beneficial purpose for this fluid and because it is typically contained in the last jets of the ejaculate it can usually be filtered before mixing with the gel-free portion of the semen.

Value of Collecting Semen on One Mount