Anti-sperm Antibodies: A Possible Source of Subfertility in Stallions 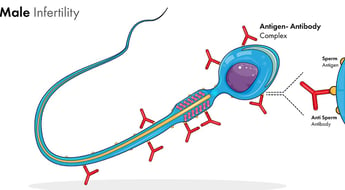 Every stallion owner’s worst nightmare: 2 months into the breeding season and your stallion is not settling his mares.  His bloodlines are impeccable, and he had a great start to his performance career so this year you offered to stand him at stud to outside mares, and the response has been great, 40 mares booked in his first season!  As a responsible and experienced stallion owner, you had a breeding soundness examination done and he passed with flying colors; good testicular size, good sperm production, good motility, concentration and morphology and his semen responded very well in a 48-hour cooled semen trial. He should be able to handle a book of 40 mares without problems.  So why isn't he settling his mares?

Fertility is a complex process that involves numerous attributes of both male and female and despite the best efforts of veterinarians and reproduction experts sometimes a clear “reason” for infertility or subfertility remains a mystery.  Male-factor infertility can be assumed if a stallion has been bred to an adequate number of fertile, reproductively healthy mares without obtaining any or very few pregnancies.  The first step in diagnosing the problem is to perform a thorough breeding soundness examination and a review of medical and breeding history.  If no abnormalities are detected then the next step is to evaluate the protocols used at the home farm for collection, evaluation, and processing of the semen.  Stallion sperm are fragile and sensitive to damage from temperature and osmotic shock, toxins, and other effects of mishandling that could be the cause of the problem.  However, if no problems are detected then it is time to look beyond the basics.  Here is where searching for answers becomes more complex.

Requirements of the Sperm Cell after Insemination

For a stallion to achieve normal fertility, the dose of semen deposited in the mare must contain a sufficient number of functionally competent sperm. In other words, sperm that possess the full complement of functional attributes required for fertilization. In addition to adequate motility and morphology, sperm must also be able to resist immunological attack in the mare’s uterus and penetrate the utero-tubal junction to gain access to the oviduct. Once there, surface proteins on an intact plasma membrane are required for binding to the oviductal epithelium to establish a sperm reservoir.  The sperm must also be capable of biochemical changes termed capacitation at the appropriate time so that a sperm when coming in contact with an oocyte in the oviduct can bind to and then undergo a physical fusion of plasma and outer acrosomal membranes to expose enzymes within the acrosome required for penetration of the zona pellucida. Once fused with the oocyte, intact, highly condensed DNA within the sperm head is released into the oocyte resulting in activation of the oocyte, formation of the male pronucleus and ultimately zygote formation.  In vitro assays to determine if all these attributes are present are not readily available. Furthermore, there are undoubtedly additional requirements that have yet to be discovered. Fortunately, flow cytometry assays using fluorescent probes have been developed that can gain insight and provide possible tools for diagnosis of infertility due to disfunction of some of the attributes mentioned above.  One such assay is for the detection of anti-sperm antibodies (ASAs). 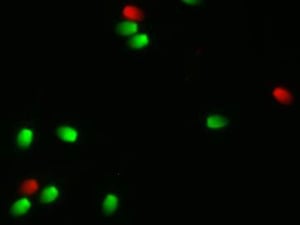 Autoimmune or anti-sperm antibodies are known to occur in many species including men, bulls, and stallions. Under normal conditions, the blood-testis barrier prevents an immune rection to sperm autoantigens. However, a breakdown of the blood-testis barrier from adverse circumstances such as environmental toxins, heavy metals, medications, infection, trauma, or injury may result in the formation and circulation of sperm-directed antibodies.  This can lead to a decrease in sperm quality, fertility, and immune related testicular degeneration. A study by workers at The University of Pennsylvania published in 1998 found that nearly 35% of sub fertile stallions were positive when tested for circulating ASAs compared to only 5% of fertile stallions and yearling colts.  The mechanism by which ASAs impair fertility are unknown in the stallion but ASAs bound to bovine sperm prevent changes in membrane fluidity, preventing capacitation and sperm binding to the zona pellucida. Sperm bound ASAs have also been shown to prevent sperm binding to the oviductal epithelium, preventing establishment of an oviductal sperm reservoir in cows.  Studies with human sperm suggest that only sperm bound ASAs are associated with decreased fertility and recently direct assay of sperm bound ASAs using flow cytometry have been standardized for bovine and now equine sperm.

Similar results were obtained in a group of 21 stallions surveyed for the presence of sperm bound ASAs. There was a high prevalence (40%) of stallions with significant binding of at least one isotype. While the percentage of IgG positive samples from first and second ejaculates did not differ between satisfactory and non-satisfactory breeders, the percentage of IgA positive samples was significantly different between the two groups.  In the group of samples from the non-satisfactory breeders, 35% of the samples were positive for IgA whereas the satisfactory breeder group had only 4.5% of the samples that were IgA positive.  Furthermore, IgA positive stallions had lower sperm motility, normal morphology, and total sperm numbers than IgA negative stallions and binding of both isotypes was associated with poor semen quality.

When the data from both experiments are combined, 92% of the ASA-positive stallions had poor post-thaw sperm motility compared to 28% of the ASA-negative stallions. The authors concluded that “while the absence of ASAs does not guarantee acceptable post-thaw motility, the presence of sperm-bound ASAs was strongly associated with poor cryosurvival.”

In conclusion, it is likely that a third of stallions in the general population have ASAs. The evidence to date suggests an association between the presence of ASAs and poor semen quality and lower sperm survival following cryopreservation.

Most of the work referenced above was conducted by teams led by Maria Ferrer, DVM, MS, DACT while on the faculty at Kansas State University and now as Associate Professor at The University of Georgia College of Veterinary Medicine.  If you are interested in having your stallion tested for ASAs please contact Dr Ferrer (msferrer@uga.edu) at the UGA Andrology Laboratory for information and pricing.

Low Sperm Count - What Can Be The Cause?