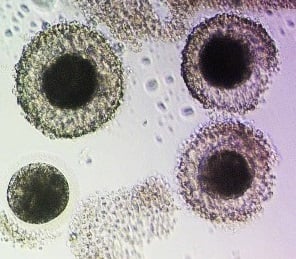 Early demise due to illness or injury can shorten a mare’s reproductive career. Additionally, subfertility can also have a negative impact on a mare’s ability to produce a foal. There have been a multitude of advances in the past 20 years that have allowed for the preservation of genetics in mares. Techniques such as transvaginal ultrasound-guided oocyte aspiration (TVA) and intracytoplasmic sperm injection (ICSI) have allowed us to produce embryos in vitro, circumvent subfertility in mares, and preserve genetics from mares that have died.

The first foal produced in vitro was born in 1996. This foal was produced from an in vivo matured oocyte from a donor mare, collected via TVA, fertilized in the lab with ICSI, cultured to form an embryo (blastocyst), and transferred back into the donor mare. This is a simplified explanation of the procedures that we perform to produce embryos in vitro.

The first step to in vitro embryo production is the acquisition of oocytes (eggs) from the ovaries of a donor mare. This can be performed via oocyte scraping of harvested ovaries if a mare has had an untimely death, or TVA while she is still alive. In mares that have died, ovaries can be harvested and oocytes scraped from every follicle present on the ovary. Oocytes recovered can be shipped overnight to a lab that performs ICSI. To obtain oocytes from live mares, transvaginal ultrasound-guided oocyte aspirations have become commonplace in many reproductive practices. This is an outpatient procedure performed under standing sedation with a mare restrained in the stocks. The ovaries are imaged with an ultrasound placed in the vagina and each follicle on the ovary is punctured, scraped, and rinsed with fluid several times. There are two types of follicles that can be aspirated during a TVA, dominant, gonadotropin-stimulated follicles and immature follicles. Oocyte recovery is higher from dominant follicles due to the loosening of the tight adherence between the oocyte and surrounding cumulus cells present in immature follicles. Typical recovery rates for a mature oocyte is 65-80%, whereas, recovery rates for immature oocytes are 43-58% [1-4]. Although recovery rates are higher for oocytes within mature follicles, typically only 1 oocyte is recovered, whereas, all immature follicles can be aspirated and more oocytes recovered. Once oocytes are acquired, they are shipped to a laboratory where ICSI and embryo culture are performed. 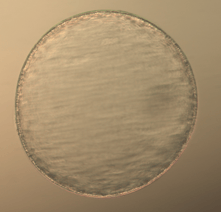 Conventional in vitro fertilization is poorly repeatable in the horse, therefore, ICSI has become the method of choice to produce embryos in vitro. When immature oocytes arrive at the ICSI laboratory they are placed into maturation culture media. Maturation rates vary between laboratories, but typically are around 60% [4-6]. Intracytoplasmic sperm injection involves the selection of 1 sperm and the injection of that sperm into a mature oocyte. The injected oocyte is then placed back into culture media and cultured for 7-10 days for embryo production. The embryo production rate also varies between labs, but is about 20% [1, 2]. Any embryos produced can either be transferred directly into recipient mares or cryopreserved for transfer at a later date. Pregnancy rates from embryos transferred directly into recipients are not significantly different from those of conventionally acquired embryos, 60-75% [7]. Transvaginal ultrasound-guided oocyte aspiration can be performed at any time of a mare’s cycle and at any time of the year, as long as follicles are present on the ovaries [4, 8]. Aspirations can be performed every two weeks, with little impact on follicle numbers, mare fertility, and show schedule [4, 9, 10].

Transvaginal ultrasound-guided oocyte aspiration and ICSI allow for the production of embryos from mares with reproductive abnormalities of the cervix, uterus, and oviducts that have been unsuccessful or inefficient in conventional breeding or embryo transfer programs. Recent data has shown that older mares had higher reproductive efficiency with TVA-ICSI versus natural breeding, artificial insemination, and embryo flush and transfer [7]. Also, stallions with poor fertility or low sperm reserves can be utilized to produce foals with these techniques. The field of equine reproduction is rapidly changing and new assisted reproductive techniques allowing for the genetic preservation of mares will likely be developed within the next 10 years.

Intrafollicular Oocyte Transfer in the Mare

A Brief Overview of the Equine Oviduct: It's Unique Features, Signs of Pathology and Current Treatments

Breeding Soundness Exam of the Mare