Is the Volume of the Inseminate Important for Fertility? 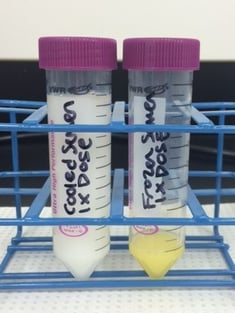 A common question asked by many breeders is whether the volume of semen deposited into the mare affects fertility. When a mare and a stallion mate naturally the entire ejaculate is deposited into the mare. This volume is usually 50 ml or more and includes several billion sperm. However, when breeding mares using artificial insemination, good fertility can be achieved with as little as 1/2 ml of semen. I have been telling breeders for years that the volume of the ejaculate is not important as long as the stallion is producing good sperm numbers. For example, a stallion can produce 8 billion sperm with 80 ml of semen at a concentration of 100 million sperm/ml or 20 ml of semen at a concentration of 400 million sperm/ml. Volume of the ejaculate and concentration are inversely related (i.e. if volume goes up then concentration goes down).

Before extenders were commercially available, mares were often artificially inseminated with raw semen of volumes as low as 2-3 ml. With the advent of commercial extenders, the raw semen is now diluted 1:1 with extender and mares bred immediately with 10-20 ml. Semen extenders are recommended to help dilute out bacteria and maintain the viability of the semen even though the mares are generally bred within an hour. With the advent of shipped semen, the ejaculate is handled differently and greater insemination volumes are used. Generally, a billion sperm are diluted to a volume of 40-50 ml then shipped in order for the mares to be bred within 24 – 48 hours of collection. Studies have shown that shipping cooled semen at concentrations of greater than 25-50 million sperm/ml reduces viability and fertility and that shipping at lower concentrations also decreases fertility. In contrast, most frozen semen is packaged in 0.5 ml straws at a concentration of 200 million sperm/ml and the insemination dose is 8 straws (4 milliliters). However, there are some frozen semen doses processed using one to four straws which are packaged at higher concentrations. To add more confusion to the issue, semen can be centrifuged to concentrate the ejaculate. Therefore, volumes as low as 0.1 to 0.5 mls are inseminated using a deep horn insemination technique.

Many of the experiments that demonstrated the importance of sperm concentration in an AI dose were done many years ago. Workers at Colorado State University (CSU) demonstrated that volumes of 50, 100 and 200 mls resulted in decreased fertility compared to 10 milliliters. However, it was not the volume that affected the fertility but the lower fertility was due to the low concentrations of sperm (1 and 0.5 million sperm /ml, respectively). Other studies at CSU and Texas A&M have shown that cooled semen diluted below 25 million motile sperm/ml reduced fertility as well. 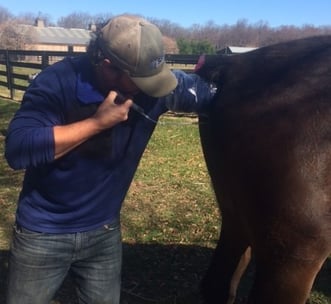 So, what are the recommendations for volume of an artificial insemination dose:

However, if this results in concentrations lower than 25 million sperm/ml then the semen must be centrifuged to concentrate the sperm.

If the concentration in the initial ejaculate is <100 million/ml then the semen should be centrifuged. The sperm pellet and about 10% seminal plasma can then be re-suspended at a concentration of 25-50 million per ml or if a smaller volume is wanted for deep horn AI then the sperm pellet can be re-suspended to a higher concentration (250-500 million /ml) since most of the seminal plasma has been removed. It is best to advise the breeder that you are centrifuging the semen and sending a low volume concentrated sample.