Management of Twins in the Mare 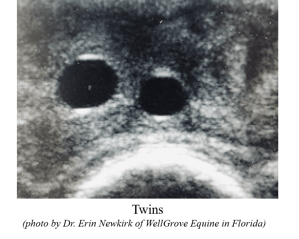 The establishment and loss of twins, often results in a mare that is barren for a year and the associated economic loss.  The incidence of twin births has been documented as occurring in 1-2% of the equine population with twinning accounting for 6-30% of abortions in the mare. When twins are present, gestation proceeds normally until the conceptuses begin to compete for uterine space or placenta.  With or without mummification, death of one fetus leads to abortion, usually between 5 and 9 months of gestation. Lactation commonly occurs after one foal dies and causes premature mammary gland development.  Surviving foals are usually weaker, more susceptible to infection, and slower to develop than singletons. Fortunately, with the use of ultrasound and an increased understanding of the mechanisms involved in twinning, better approaches to twin reduction have been developed.

Manual reduction is preferentially and most successfully performed before fixation of the embryonic vesicles (< 16 days post-ovulation).  If twin conceptuses are observed after fixation, manual reduction can be attempted, however manual reduction of unilaterally fixed twins is difficult without damaging both conceptuses.  It is important to try not to rupture the vesicle but only damage it by trying to slip the membranes (vesicle wall and uterus) making the vesicle fluid flocculent.  If flocculence or irregularity in the vesicle wall is obtained most embryonic vesicles will be resorbed within 2-3 days.  Manual manipulation trans-rectally, while damaging without rupturing of one of the vesicles between 28 and 42 days, resulted in 28% of the mares having a single viable foal.

Puncture of the embryonic vesicle (TVUEVP) or injection (TVUEVI) of Amikacin Sulfate (1ml) has also been attempted to damage one embryo at day 28 of gestation. Although not significantly different than TVUEVP, TVUEVI successfully reduced 40% (2/5) of twin pregnancies.  This technique may therefore prove to be a better method for twin reduction however the numbers in this study were small, so further trials are needed.

Another procedure described by Angus McKinnon can be attempted between 45-50 days of gestation. Once the umbilicus has been formed, the designated fetus is oscillated quickly which either alters umbilical blood flow or dislocates the fetus from the umbilicus.  This stage of gestation is suitable for management by fetal oscillation due to the length of the umbilicus.  Single manipulations can be successful or multiple sessions may be required so that it reverberates against the vesicle wall and becomes separated from the umbilicus.  In a case report, 4/5 cases described to have normal foals with the fifth still in foal.

Cranio-cervical dislocation (CCD) is described as the dislocation of the first cervical vertebrae from the cranium, disrupting the ligamentous attachments and severing the spinal cord.  This procedure can be performed using transrectal or transabdominal techniques between 60 and 110 days of gestation to produce a single foal. The basis for this procedure is to eliminate one twin before placental formation is complete, allowing the remaining fetus to utilize the entire endometrial surface for nutrient and oxygen exchange and to grow to its full potential.

Transrectal manipulations have been performed between 60 and 90 days of gestation.  The smaller fetus or the fetus that has less contact with the endometrium and minimal space to grow is preferentially reduced.  This fetus is usually identified in the more cranial aspect of the uterine horn in unilateral twins.  After cranio-cervical dislocation, death with loss of the fetal heartbeat is usually evident within 24 hours to one week.  Fetal viability should be evaluated every two to four weeks to establish normal growth of the continuing fetus and demise of the other.

If transrectal reduction cannot be achieved, a surgical procedure can be used.  To date, this procedure has been used for twins between gestational ages of 58 and 150 days.  Transabdominal ultrasound is used to identify the horn in which the most viable fetus is located, as determined by fetal size and by the fetus that has the greatest surface area for attachment to the endometrium.  A standing flank laparotomy is performed in the right flank allowing for decreased risk to the spleen. CCD is performed by manipulating the fetus through the uterus, without incising or invading the uterine lumen.  With this technique, death of the manipulated twin may not be evident until 24 hours to 7 weeks. 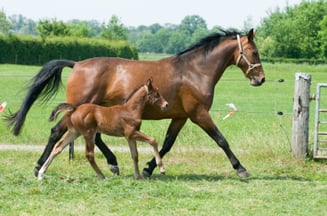 Ultimate success of the transrectal procedure at 55 to 90 days has had 63% deliver a single fetus of normal size.  Unfortunately, the transrectal procedure is technically difficult, and multiple manipulations of the fetus are sometimes necessary before dislocation is achieved and therefore only the trans-abdominal procedure has continued to be performed to date. CCD, using the surgical procedure, has been performed between 58 and 150 days of gestation.  Manipulations were only performed once. CCD, using the intra-abdominal surgical procedure, produced a single normal healthy foal in 63.16% of mares. With this technique, death of the manipulated twin was evident from one to 8 weeks post procedure.

Recently, CCD has been performed via colpotomy. Sixty four percent of mares had a single normal sized foal with 5, or 36%, aborting both. (Unpublished data from Dr. Reed Holyoak) All foals that survived were normal sized healthy foals at birth.  This percent survival rate of a single foal is similar to the other two procedures described above.

The use of transcutaneous ultrasonography to aid in twin reduction in the mare was pioneered by Rantanen and Kincaid in 1988. In experienced hands, an average of 50% of mares undergoing transcutaneous twin reduction will deliver one live foal. The suggested time to perform this procedure is between 115- and 130-days gestation. The procedure is performed in the standing, heavily sedated mare to promote movement of the fetuses into the cranial abdomen for easier accessibility and to minimize fetal movement during the procedure. The mare is examined with a 2.5-3.5 MHz transducer to determine fetal positioning and size. The most accessible fetus is selected for reduction, or when possible, the smaller fetus is targeted.  Once the needle is passed into the peritoneal space, the needle tip is located on the ultrasound image, advanced through the uterine wall and into the fetal heart.  Potassium chloride or procaine penicillin are injected into the fetal heart, thorax or abdomen.

When other procedures fail to produce a single viable conceptus and endometrial cup formation has occurred, aborting both conceptuses is the last option.  Most mares that are carrying twins will naturally abort between 7 and 9 months.  However, if natural abortion is allowed to occur, the breeding season will be lost, and the next breeding season may be affected.  More importantly, mares have increased risks for dystocia, cervical tears, retained placentas and associated complications. While some mares successfully carry twin pregnancies to term, the risks of complications during pregnancy or delivery warrants early intervention.