Methods to Obtain the Concentration of Sperm in a Stallion Ejaculate 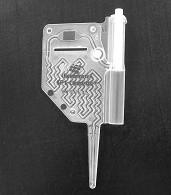 Knowing and keeping track of the concentration, or the number of sperm per milliliter, of each ejaculate for a stallion is very important for a variety of reasons. The concentration of his semen, along with the volume of his ejaculate, is used to determine the total number of sperm he produces in a given collection. These two numbers (volume and concentration) are used to calculate insemination doses. Also, keeping a record of each number can help stallion managers recognize if there are any changes in the reproductive health of the stallion. Slight variations are likely nothing to be concerned about. However, if the number of sperm in the ejaculate varies drastically, from collection to collection or a steady decrease in his total number of sperm over time, one may begin to ask what is causing the change. This information is valuable so that any concerns can be addressed as soon as they arise.

There are several different methods that can be used to determine the concentration of sperm in a stallion’s ejaculate. The two most commonly used on breeding farms are spectrophotometric based machines and manual counting using the hemocytometer. If used properly, each method will result in the same information. However, the cost and skill level required for each method widely vary. For the purpose of this article we are going to break them down into two types of methods, those which require raw semen for analysis vs those which can perform an analysis using either raw or diluted semen.

Several instruments within the equine breeding industry utilize spectrophotometry to determine the number of sperm per milliliter. Each system passes a beam of light through a sample of raw semen. Refraction of the light occurs when it enters the sample (diluted or raw), bounces off of the sperm cells and the light is made to change direction. These instruments measure the degree to which the light changes direction and provides us with the number of sperm per milliliter of the ejaculate being analyzed.

Densimeter (aka The Blue Box)

Animal Reproduction Systems (ARS) currently has two options of the Densimeter, aka The Blue Box, available. The ARS 590B Equine Densimeter (photo below) is designed to be portable and has a built-in battery charger. Whereas the larger model, the ARS 591B Equine Densimeter is best used in a stationary environment but can also be mobile with the use of a 12-volt car adapter.

Both of these systems are self-calibrating but require additional supplies to determine the concentration such as a pipette, disposable pipettor tips, cuvettes and a formalin solution with a dispenser. The dispenser aliquots the 10% buffered formalin into the cuvette to perform the sample analysis. The formalin solution kills the sperm and renders them immobile. This allows the system to accurately determine the count of the cells. The plastic cuvettes used in these systems are disposable and manufactured to be used for a single analysis. It is also a good idea to have the pipettor cleaned and calibrated on a regular basis to ensure you are obtaining the most accurate data possible.

It is recommended to discard and do not use the first pump of the day from the formalin dispenser. This is because the liquid in the tube can dry out overnight and therefore, the amount of formalin pumped into the cuvette could be less than required to correctly run a sample. 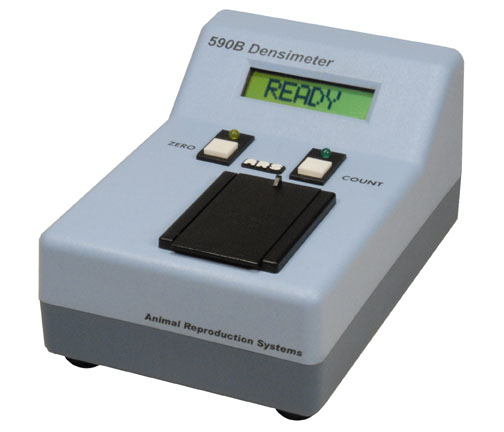 The following protocol is used for the ARS Densimeters: 3.42mL of 10% buffered formalin is aliquoted into the cuvette. The cuvette is designed with two smooth sides and two ribbed sides. It should only be handled on the ribbed sides so fingerprints do not interfere with the light passing through the sample which could result in an inaccurate count. Then, the cuvette is placed in the machine and “zeroed” prior to including the semen. After it has been zeroed, a raw sample of semen,180µL, is added to the cuvette. After the semen is drawn into the pipette tip, it is recommended that it be wiped off prior to adding the raw semen sample to the cuvette. This will help to avoid adding too much of the raw semen to the cuvette. The cap is then placed on the cuvette, the sample is inverted several times to ensure the raw semen is properly mixed with the formalin and then it is placed in the machine.

When used properly, the Densimeters are accurate in determining the concentration of sperm in stallion ejaculates. However, it is important to follow the manufacturer’s directions for its use and to make sure the formalin dispenser and pipettes are dispensing the correct amounts needed. The number of sperm per milliliter reported by the machine will be skewed if the volume of either the formalin or raw semen is more or less than required.

Keep in mind that only raw semen can be used in photometric instruments like the ARS Densimeter. Extenders typically consist of egg yolk, sugars, milk, etc. The components of these extenders will interfere with the amount of light passing through the sample and provide inaccurate information regarding the number of sperm in the sample. Other photometric systems include the Minitube Spermacue, Minitube SDM-1, and the IMV Accuread.

Sometimes it is necessary to obtain the concentration of an extended semen sample such as after centrifugation or on a dose of cooled semen. In these situations, it is necessary to use either the Hemocytometer or a system in which the sperm are stained, such as with the NucleoCounter® SP-100™ (photo below; ChemoMetec A/S in Denmark). 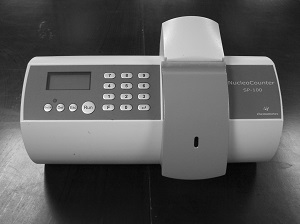 The NucleoCounter uses a fluorescent dye to stain the nuclei of the sperm cells which allows the analysis of extended semen samples. Whether the sample is raw or extended, it is able to provide a much more accurate and repeatable number because it stains the nuclei. For example, dirt and debris in the ejaculate, that might get counted by a Densimeter, would not be counted by the NucleoCounter. Consequently, the NucleoCounter might report a sperm concentration 15-20% less than a Densimeter.

The following protocol is used for the NucleoCounter: The semen sample, raw or extended, is first diluted into a detergent solution known as Reagent S-100. This solution allows the membrane of the cell to be permeabilized. The sample is then loaded into specially designed cassettes (SP-1) that contain a microfluidic channel that incorporates propidium iodide, a fluorescent dye that stains the nucleus of the sperm cells. Within the NucleoCounter is a fluorescent microscope that detects the fluorescent signal from the nuclei of the sperm. Once analyzed, the SemenView™ software takes the information is has obtained and turns it into the number of sperm per milliliter.

The hemocytometer was originally invented for the counting of red blood cells. Though there are many different types of hemocytometers available, the Neubauer hemocytometer (photo left) is the one most utilized for the counting of sperm cells. It has two “chambers” engraved into a thick glass microscope slide. Perpendicular lines (photo below) are laser-etched into the chambers to assist in counting the cells. An aliquot of the semen sample is diluted and then loaded into the chambers via capillary action. Then the slide is placed under a microscope and the sperm are visually counted by the technician. Using a hemocytometer results in an accurate count as long as the chambers are filled to the correct depth and the protocol is correctly followed by the technician. Keep in mind, it is recommended that four chambers (two slides) be counted in order to obtain a high level of repeatability.

Although the hemocytometer is considered the “Gold Standard” when determining the concentration of sperm in an ejaculate, it is more time consuming and requires more skill, than the spectrophotometer instruments described previously. However, it is the cheapest of the methods discussed in this article and it can be equally as accurate as a NucleoCounter if used correctly. 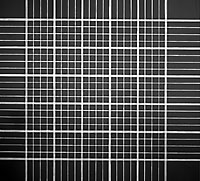 The method and system you choose to determine the concentration of sperm in a stallion’s ejaculate isn’t as important as the skill level of the technician using it. If the same sample of semen was tested in each of these systems, and the system was used properly, each should result in a similar answer as to how many sperm are in each milliliter of an ejaculate. Once you have chosen the system that works best for your situation, be sure to familiarize yourself with its workings, know the functions it can perform, and learn how to use it correctly. Having this knowledge about the equipment in your laboratory will assist you in obtaining the correct data and help determine if there is an issue that needs addressed with a stallion regarding his reproductive health.

My Stallion is Not Settling His Mares...What Do I Do? - Part 1

My Stallion is Not Settling His Mares...What Do I Do? - Part 2