Should Frozen-Thawed Semen Be Diluted Prior to Insemination? 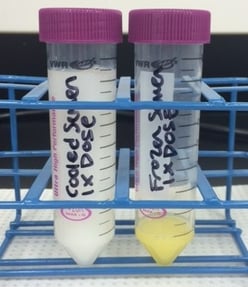 For veterinarians and technicians accustomed to inseminating fresh or cooled semen in large (20-60 ml) volumes, the idea of inseminating 0.5 to 4 ml of thawed frozen semen can be intimidating.  During processing, frozen semen is concentrated by centrifugation and is typically packaged in small 0.5 ml straws at a sperm concentration that is often as much as 5 to 10 times greater than cooled semen. Therefore, a full insemination dose of frozen semen may be contained in just a few milliliters of volume whereas the same number of sperm extended for cooling may require 30-40 ml of volume.

What Happens to Sperm When Diluted in an Extender?

Spermatozoa have a plasma membrane that surrounds the entire cell which acts as a barrier to large molecules and allows the passage of some small molecules and water in and out of the cell. A sperm in solution, whether it be seminal plasma or an extender has a mixture of particles and water both inside and outside the cell, separated by this plasma membrane. The particles in a solution are called solutes and the fluid (water) is the solvent. During processing for cryopreservation, sperm are suspended in an extender which is a solution of sugars, salts, buffers, antibiotics, proteins, lipids and one or more cryoprotective agents (CPA’s). The most common CPA is glycerol but others such as ethylene glycol and methyl formamide are also used in some extenders.

When sperm are placed in an extender it is important that the extender be osmotically balanced with the sperm to prevent damaging the sperm from osmotic shock. If the osmotic pressure is not balanced and the concentration of solutes outside the cell is higher or lower than the solute concentration within the cell, there is an osmotic gradient that is set up across the plasma membrane. The plasma membrane can allow the rapid diffusion of water in or out of the cell in an attempt to balance the osmotic gradient.

On the other hand, if the extender solution is hypertonic (meaning the concentration of solutes is greater than inside the cell) water diffuses out of the cell across the plasma membrane and leads to dehydration of the cell which can also be very damaging. So, even for fresh or cooled sperm diluted in an extender, if the extender is not properly prepared and osmotically balanced this dilution can lead to damage of the sperm.

What Happens to Sperm During Freezing? During the freezing process, semen is diluted in a basic extender and centrifuged to concentrate the sperm and remove most of the seminal plasma. The sperm are then resuspended in a freezing extender containing a number of solutes plus a CPA such as glycerol. Glycerol and the other commonly used CPA’s are called penetrating CPA’s because they can penetrate the plasma membrane of the cell, although at a much slower rate than water.

During equilibration and prior to freezing some of the CPA penetrates the cell and some water leaves the cell in an attempt to balance the gradient in CPA concentration that exists. Naturally, there is no CPA found inside sperm when they are ejaculated so the CPA enters the cell and water leaves resulting in a partial dehydration of the cell. Further dehydration occurs when the pure water outside the cell begins to freeze as the straws of extended semen are exposed to nitrogen vapor. The water outside the cell freezes before the water inside and as a result of the formation of this pure ice, the concentration of the remaining solutes outside the cell increases. More water then leaves the cell, leading to further dehydration. The degree of dehydration is dependent on the cooling rate.

Once the extended semen is frozen and stored in liquid nitrogen at -197 degrees Celsius, there is virtually no metabolism occurring and no more water or CPA movement across the plasma membrane.

What Happens to the Sperm When the Semen is Thawed?

When the frozen semen is thawed, the water thaws and the cell rehydrates to an isosmotic state with a balanced concentration of solutes and CPA on either side of the plasma membrane. When the thawed semen is then inseminated into the uterus of a mare, the sperm are diluted in uterine fluids which of course do not contain CPA’s. So, another CPA gradient is set up across the plasma membrane and water from the uterine fluids will move rapidly into the cell as the CPA diffuses (more slowly). The result is a temporary ballooning of the plasma membrane and increase in cell volume until all the CPA has diffused out of the cell and the excess water moves back out across the plasma membrane. The same effect occurs when the thawed semen is diluted in an extender that does not contain CPA’s.

Why We Recommend NOT Diluting Thawed Semen Prior to Insemination?

So, if this volume change occurs whether the semen is immediately inseminated or if it is first diluted in an extender, why do we recommend not diluting prior to insemination?

There are some potential benefits to dilution prior to insemination.

The potential problems associated with dilution prior to insemination include the following:

In my opinion, the benefits do not outweigh the potential problems and therefore it has been our recommendation to not dilute thawed semen prior to insemination.

For those concerned with loss of too many sperm in the insemination equipment we recommend use of a flexible insemination pipette with a small bore inner catheter commonly used for deep horn insemination as they typically result in fewer sperm left in the catheter. There are also insemination guns in which the straws are loaded one by one and use a metal stylet to push the cotton plug of the straw through the straw to express the semen directly from the straw out the end of the gun and into the uterine body.

Some practitioners using a normal insemination technique will first inseminate the thawed semen, leave the insemination pipette in place and “flush” the pipette by attaching a syringe with a few milliliters of extender and passing that through the pipette after the semen has been deposited. This technique may minimize some of the risks associated with dilution of the entire dose of thawed semen in extender prior to insemination.

Quality Control is at the Core of the SBS Difference

The Pros and Cons of Equine Frozen Semen

What Exactly is a Dose of Frozen Semen?