The Immunology of Endometritis, and the use of Immunomodulators to Improve Pregnancy Success 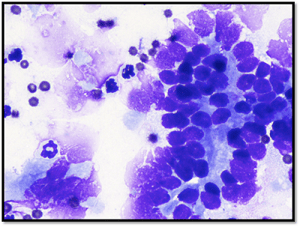 Inflammation and/or infection of the endometrium is the leading cause of subfertility in the horse, with persistent breeding-induced endometritis (PBIE) effecting approximately 10-15% of broodmares [1].  The deposition of spermatozoa, seminal plasma, and/or bacteria into the reproductive tract causes an inflammatory response, leading to an activation of the immune system.  This involves an activation of signaling molecules (cytokines), recruitment of immune cells (neutrophils), and eventual release of prostaglandin F2 alpha (PGF2a) from the inflamed endometrium, all of which lead to the eventual expulsion of excess fluid and contaminants [2-10].

The majority of mares are able to resolve this inflammation within 24-36 hours and are considered resistant to PBIE, while a subset of mares experience prolonged inflammation, and are considered susceptible to PBIE [11]. To breeders and practitioners, the hallmark indicator of susceptibility is prolonged uterine fluid accumulation, extended neutrophilia within the uterine lumen, and persistent inflammation for greater than 96 hours post-breeding [5, 12, 13].  This altered immunology will impede embryo viability upon migration from the oviduct, leading to subfertility in these mares.  While both the susceptible and the resistant mare experience this activation of the innate immune response, it has been shown that susceptible mares fail to mount the anti-inflammatory response required to mitigate pro-inflammatory signaling [5], and this is believed to be a primary cause of the persistent inflammation noted in these mares.

Substantial research has gone into understanding the immunology of breeding, and pathophysiology of endometritis. Dr. Elizabeth Woodward discovered that six hours following insemination was a critical time point within this immune response.  At this time, resistant mares experienced an upregulation of various anti-inflammatory and immunomodulatory signaling molecules, including interleukin (IL)-1 receptor antagonist (RN), IL-10, and IL-6 [5].  In contrast, the susceptible mare was unable to mount an anti-inflammatory response, and this was believed to be the cause of the prolonged inflammation noted in this group of mares. This was specifically observed as an increased expression of the pro-inflammatory cytokines IL-1b and IL-8, both of which contribute to the recruitment of various immune cells, specifically polymorphonuclear neutrophils (PMNs) which are often noted on endometrial cytology post-breeding.

A variety of therapeutics are utilized for the management of PBIE, and many are targeting the resolution of this persistent inflammation.  Deemed immunomodulators, this class of therapeutics modifies the immune response or the function of the immune system through a variety of pathways, whether it be in stimulation or suppression of signaling molecules, recruitment of essential immune cell types, or activation of other aspects of immunity, including antigen recognition and processing. Here, we review the immunomodulators available to the practitioner for the treatment of PBIE.

Non-steroidal anti-inflammatories (NSAIDs) are routinely administered with the intent to diminish the persistent inflammation noted in susceptible mares. Most NSAIDs inhibit cyclooxygenases (COX)-1 and COX-2), thereby decreasing the production of prostaglandins. As the primary activity of PGF2a is activation of myometrial contractility, the inhibition of this lipid can lead to insufficient uterine contractions and luminal fluid accumulation if mares are not treated simultaneously with a drug to stimulate uterine contractions.  Various NSAIDs have been critically evaluated for the treatment of endometritis, including flunixin meglamine (1.1mg/kg IV), firocoxib (0.2mg/kg SID PO), and vedaprofen (2mg/kg BID PO).  All have been found to effectively reduce the number of neutrophils in the uterine lumen, however, only firocoxib was found to have no negative impact on ovulation, embryo recovery, and embryo mobility [14-16].

Glucocorticoids are a class of corticosteroids, and thereby modulate the immune system by effecting downstream functions of the glucocorticoid receptor.  Various glucocorticoids are available to the practitioner, although few have been critically evaluated for their efficacy in the treatment of PBIE.  A single dose of 50mg dexamethasone at the time of challenge has been found to benefit the susceptible mare by decreasing the expression of pro-inflammatory signaling molecules in addition to the positive acute phase protein SAA [17, 18]. Clinically, a single dose of dexamethasone at the time of breeding improved pregnancy rates in mares with more than 3 risk factors associated with susceptibility to PBIE [19].  It should be noted that various glucocorticoids have been found to alter secretion of GnRH and LH, in addition to altering the hypothalamic-pituitary-gonadal axis. Additionally, prolonged administration of dexamethasone has been associated with ovulation failure [20]. Therefore, treatment of PBIE should be limited to a single dose of dexamethasone.

Extracts from non-pathogenic bacteria are utilized for their anti-inflammatory, anti-microbial, and anti-cancer functions in a variety of diseases and disorders.  Of these bacterial extracts, two have been evaluated for their efficacy in the treatment of equine PBIE: Mycobacterium cell wall fraction (MCWF; Settle®; NovaVive, CAN) and Propionibacterium acnes (Eqstim®; Neogen, USA).  Settle® has been found to act as both antimicrobial and anti-inflammatory in susceptible mares [17, 21-23].   Additionally, Settle® was found to significantly reduce the number of mares who cultured positive for bacteria following challenge, and this was noted both following inoculation with gram-positive and gram-negative bacteria [17, 24].  Settle® is described to be effective at 1.5mg whether administered intravenously or infused into the uterine lumen, although timing of administration has been variable.  Manufacturers recommend it be administered at the time of breeding for the most comprehensive results.

Eqstim® has also been investigated for the treatment of endometritis.  In one study, repeated administration of Eqstim® as an adjunct to conventional therapies improved pregnancy rates in mares with clinical endometritis in comparison with a placebo, but the study did not evaluate if this product works when utilized alone.

One of the key factors that is believed to differentiate the resistant mare from the susceptible is in the respective innate immune system’s ability to degrade and digest bacteria and excess spermatozoa from the uterine lumen.  It was noted that the addition of blood serum significantly increased the opsonization potential in both the resistant and susceptible mare, indicating an antimicrobial effect of blood plasma. The administration of intrauterine blood plasma was found to improve clinical outcomes and increase pregnancy rates [25].  Unfortunately, the use of intra-uterine blood plasma for the treatment of endometritis was then evaluated within a controlled study and found ineffective in the treatment of either lymphocytic or infectious endometritis [26].

Decades later, plasma treatment protocols were modified through the intra-uterine administration of platelet-rich plasma (PRP).  A concentrate of platelet-rich plasma protein derived from whole blood, PRP contains a variety of growth factors (GF) and cytokines that are released from the intracytoplasmic granules when the cells are activated.   PRP is utilized in a variety of tissues and disorders for both its anti-inflammatory, anti-microbial, and angiogenic properties. In the horse, PRP has been found to function as anti-inflammatory, in addition to increasing fertility rates in the susceptible mare, and this was noted regardless of timing of administration (24 hours pre-insemination or 4 hours post-insemination) [27-29].

During the 1970s, naturally-sourced biologics began to be evaluated for the treatment of inflammation/infection in the uterus, with intra-uterine infusion of equine colostrum as one of the first [30].  Attempted due to its high immunoglobulin content and potential antimicrobial action, colostrum was taken from mares immediately after parturition, and then 120mL was infused into the uterus of mares struggling with subfertility.   While anecdotal evidence demonstrated that the mares returned to normal cyclicity and fertility, quantitative data indicated that various immunoglobulins (IgG, IgM, IgE) were found within the uterine lumen and endometrial glands following treatment.  However, later studies showed no intrauterine deficiency in IgG and IgA in susceptible mares when compared to resistant mares, and the authors concluded that inadequate immunoglobulins are not likely to be the cause of susceptibility to persistent endometritis [31].

The immunomodulation noted following biologic administration was expanded through the intra-uterine infusion of lactoferrin.  A protein found in a variety of tissues and secretions, lactoferrin is found in high concentrations in both milk and seminal plasma and has been described as both anti-inflammatory and antimicrobial in a variety of species, although its bactericidal properties have not been elucidated in the horse [32, 33].  When infused into the uterus of susceptible mares, 150ug/mL human recombinant lactoferrin (Re-LF) was found to decrease the circumference of luminal fluid, lower the number of neutrophils noted on endometrial cytology, and decrease the expression of pro-inflammatory cytokines [34-36].  More work is needed to assess the bactericidal properties of ReLF and its utility in the treatment of infectious endometritis.

Mesenchymal stem cells (MSCs) have also been investigated for their anti-inflammatory and regenerative effects.  For the past two decades, MSCs have been utilized in a variety of diseases/disorders in humans, although research into their capabilities in the horse are more limited.  In resistant mares, intra-uterine infusion of bone marrow-derived MSCs at 24 hours prior to insemination was found to decrease the number of neutrophils in the uterine lumen, in addition to increasing the expression of anti-inflammatory cytokines [37, 38].   Additional work found MSCs to be a safe and effective anti-inflammatory option for the uterine lumen without invading or implanting within the endometrium [39].

In conclusion, it is only with a better understanding of the pathophysiology of endometritis that inferences can be made into diagnostic tools and therapeutic options.  Additionally, numerous immunomodulators are available to the practitioner for the treatment of endometritis and in an era of ever-increasing antibiotic resistance, this class of therapeutic should be considered at the forefront of treatment options.  While many immunomodulators are used in standard practice, others require additional research to fully elucidate their impact on the immune system, as well as abilities to replace antibiotics due to bactericidal properties, and this includes lactoferrin, MCWF, and PRP.   With a better understanding of these therapies, breeding practices can be optimized to improve pregnancy success while causing less harm to global health.

[3] Troedsson MH. Uterine clearance and resistance to persistent endometritis in the mare. Theriogenology. 1999;52:461-71.

[11] Troedsson MH, Woodward EM. Our current understanding of the pathophysiology of equine endometritis with an emphasis on breeding-induced endometritis. Reprod Biol. 2016;16:8-12.

[19] Bucca S, Carli A, Buckley T, Dolci G, Fogarty U. The use of dexamethasone administered to mares at breeding time in the modulation of persistent mating induced endometritis. Theriogenology. 2008;70:1093-100.

[26] Asbury AC. Uterine defense mechanisms in the mare: The use of intrauterine plasma in the management of endometritis. Theriogenology. 1984;21:387-93.