The Sperm Mitochondrion: Organelle of Many Functions 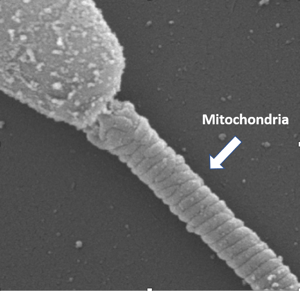 The sperm mitochondrion (pictured left) is one of the most damaged organelles during cryopreservation and is likely responsible for the majority of loss in motility and fertility after a freeze-thaw cycle. Our laboratory at UC Davis has focused on developing an increased understanding of mitochondrial bioenergetics in sperm that could provide strong rationale for marked improvement in preservation and assisted reproduction techniques.

Most stallions produce sperm that is fully functional, able to fertilize with artificial insemination (AI) or assisted reproductive techniques including intracytoplasmic sperm injection (ICSI) but when a problem arises for a stallion, the costs in management and fertility loss can be surprisingly high, and often hidden. The economics in the breeding industry are frequently staggering from age-related or idiopathic declines in stallion fertility. Stallions are unique among livestock in that they are often asked to breed long into their senior years. Since sperm motility is powered by its mitochondrial energy, the mitochondria have been long-neglected as a study subject critical to maintenance of motility during the aging process. A number of research laboratories around the world have taken up this subject and with recently developed tools to understand sperm in the laboratory, there has been a quiet upsurge in understanding about sperm motility.

Mitochondrial function in ejaculated sperm is ultimately reflected by ATP production, mitochondrial oxidative efficiency, and production of reactive oxygen species. The balance of these factors may become compromised in aging stallions and may be confounded during the process of cryopreservation. The sperm flagellum is powered by adenosine triphosphate (ATP) produced by a complex of mitochondrial enzyme systems including the electron transport chain (ETC). As such, the powerhouse of the cell, the mitochondrion, is likely the foundation of sperm pathophysiology and structure. Species differences in energy requirements for mitochondria for optimal sperm function are becoming evident and individually tailored sperm handling and storage techniques are likely to become clinical reality as the biochemistry and cellular physiology of sperm are uncovered. Media modifications for sperm processing and storage may become necessary in order to provide appropriate energy substrates to minimize sperm damage and improve sperm longevity after cryopreservation.  In fact, damage to the sperm’s mitochondria is one of the most marked organelle changes during cryopreservation and is likely responsible for the majority of loss in motility and fertility after cryopreservation. An understanding of sperm mitochondrial bioenergetics provides strong rationale to make considerable improvement in preservation and assisted reproduction techniques.

Equine sperm each contain 40 to 50 mitochondria in the midpiece composed of single mitochondria that are fixed in place along the sperm’s midpiece (see photo above). Functions of mitochondria in sperm include ATP production for motility, reactive oxygen species (ROS) production, apoptosis, and calcium homeostasis. Equine sperm possess machinery for the cellular processes of glycolysis, the citric acid cycle, and oxidative phosphorylation (OxPhos) to meet the large energy requirements for motility and the subsequent hyperactivated motility that is required for sperm to fertilize an egg.

Recent studies reported that equine sperm ATP production for motility is primarily driven by OxPhos rather than glycolysis, although glycolysis is anaerobic and still contributes to ATP production and motility (Gibb et al, 2014; Darr et al, 2016b).  This differs from sperm metabolism in other species such as humans and cattle which still carry out essential sperm functions such as flagellar motility when OxPhos is inhibited. It is reasonable to consider that there may be a metabolic shift to glycolysis with aging and semen cryopreservation when the mitochondria become less efficient due to the altered physiological state of the sperm. Since glycolysis is less efficient than OxPhos (producing 2 ATP per molecule of glucose whereas OxPhos produces 30 ATP per ETC cycle) this could at least partially explain the decrease in motility seen in both cryopreservation and aging. In the aging testicle there is decreased antioxidant buffering capacity which includes decreased superoxide dismutase enzyme activity as well as less active intra-mitochondrial catalase and peroxidase.

This leaves sperm more susceptible to oxidative cell and DNA damage which could lead to decreased OxPhos.

Cryopreservation often results in significant membrane and organelle damage to spermatozoa after thawing but the exact causes and targets of cryoinjury have  not been determined (Ball, 2008;  Darr et al, 2013, 2016). Possible causes include ROS production and apoptosis and potential targets include plasma and mitochondrial membranes and their known  high content of polyunsaturated fatty acids (PUFA). Post-thaw sperm motility is typically less than 50 percent of initial motility and this proportion is lower and more variable in stallions than for other species. Mitochondria are responsible for the majority of ROS that can cause oxidative cellular damage during cryopreservation. The  daily yield of ROS can reach 107 molecules of superoxide anion per mitochondrion and negative effects on sperm include decreased fertility, motility, morphology, viability, altered membrane potential, and mtDNA damage (Peña et al, 2015). The high variation between males, especially in stallions, is an industry problem and may originate in sperm mitochondria.

Mitigation of specific types of sperm mitochondrial damage in stallion sperm is likely to be elusive for the immediate future. Currently, semen extenders containing large macromolecules such as milk-based proteins are used commercially to essentially absorb oxygen free radicals known to be detrimental to sperm membranes. Other studies have utilized antioxidant compounds with variable success although some have recently been incorporated into semen extenders. As more knowledge is developed about sperm mitochondrial function, numerous labs around the world are poised to figure out new ways to minimize oxidative or other injury to stallion sperm resulting from inevitable aging but also cryopreservation methods will very likely be vastly improved as new understanding is developed about how sperm function.

This review is partially based on a published paper entitled “Sperm mitochondrial regulation in motility and fertility in horses” published in 2019 in Reproduction of Domestic Animals as a presented paper at the European Society for Domestic Animal Reproduction Annual Meeting in St. Petersburg, Russia held September, 2019.

Ball B. 2008. Oxidative stress, osmotic stress and apoptosis: impacts on sperm function and preservation in the horse. Anim Reprod Sci. 107, 257-267.