Hastening the Onset of the Breeding Season

The horse is a seasonal breeder meaning that natural mating occurs during certain times of the year to ensure that the timing of birth is optimal for survival with regard to ambient temperature, food and water availability, and even changes in the predation behaviors of other species.  Seasonal breeders are controlled by the length of daylight, i.e. the photoperiod, and can be divided into long day breeders, e.g. the horse, that start cycling when the days get longer (spring) and short day breeders, e.g. deer and some breeds of small ruminants, that start cycling when the days get shorter (fall). The length of photoperiod can be manipulated in order to hasten the onset of the breeding season. This is a popular management technique used in many breeds, so foals can be born as close to the standardized January 1st birth date as possible. It is also common with show or halter horses, with the goal being to maximize maturity for age determined competition.

Putting Your Mare Under Lights

Breeding season in the Northern hemisphere mare typically runs from late spring (April) through early fall (September). The mare, being seasonally polyestrous, has multiple heat cycles during the reproductive season. During the winter months (mid-Nov to mid-Feb) the mare is considered to be anestrous, demonstrating no behavioral signs of sexual receptivity and a failure to develop follicles that ovulate. Although it is estimated that 75-85% of mares are truly anestrous, it is possible that the remaining mares may show some estrous activity, albeit erratic and usually anovulatory. Either side of anestrous the mare is in a transitional period that is also characterized by inconsistent heat cycles with inconsistent ovulations. Year round estrous behavior can be seen in mares closer to the equator.

Females are typically more “seasonal” than their male counterparts. Thus, unlike mares that enter an anestrous period, stallions remain fertile year-round, usually showing only a mild decline in sexual behavior and sperm production out of season. Consequently manipulation of the photoperiod is predominantly targeted to the mare and is accomplished by “putting the mare under lights”, which is (almost) as simple as it sounds. Supplementing the length of “daylight” with artificial lighting is referred to as phototropic stimulation. The mare should begin to cycle 50 to 60 days after the beginning of a lighting program. So, beginning a lighting program on December, 1st will allow for normal estrus cycles and breeding during February. The results of this lighting program usually allow for a foal to be born in January of the following year. 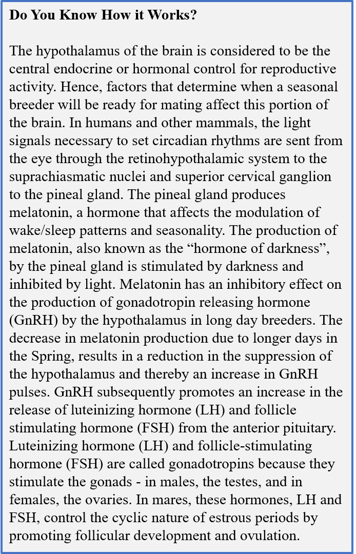 Lighting Programs
There are a number of different lighting programs that can be used to accomplish the same goal. The first and most preferred method is to provide from 14-1/2 to 16 hours of continuous light each day. If the mare is turned out during the day she must be brought in and put under artificial lights before the natural light outside fades. If you want to coordinate the breeding cycles of a group of mares, this can be accomplished by lighting their shared paddock.

Lighting can be started abruptly on December 1st or can be increased gradually over a period of 60 days. For example, under the constant regime the lights are turned on from 4:30pm to 10 or 11pm for 10 weeks prior to the desired breeding date. With the step wise regime 3 hours of light are added the first week and then another 1/2 hour of light each additional week until a 15-16 hour “day” is achieved.

Another lighting plan involves turning on the indoor lights, for a short period, starting nine hours after sunset, and continuing that program until the nine hours coincides with sunrise. However, since the time of the sunset is constantly changing, this program requires routine management to make sure you change the timing of the lighting to coincide with the changing sunset. This lighting plan has fallen out of vogue over the past few years.

How much light is required?
A critical factor is the amount of light that must be provided to simulate daylight. A minimum of 10 foot candles of light (107 lux) is required, either incandescent or fluorescent. A good rule of thumb is to provide enough light to comfortably read the small print in a newspaper seated anywhere in the stall. A 100 watt light bulb (or two 40 watt bulbs) provides enough light for the average sized stall.  There are also easy phone based apps that can provide a light meter to help determine if enough light is present in the stall or paddock.  I have searched "Light Meter" in the app store of common phones and found many apps work quite well.

Novel Approach
Research has shown that light provided by blue light wavelengths is the most effective light waves in stimulating a mares pineal gland.  Equilume masks, a commercial company, provides masks of varying sizes to fit a mare's head, much like a fly mask.  One eye has a cup that focuses blue light waves to mimic the pattern of addition of artificial lighting.  The masks are battery operated, some are single use, some have rechargeable batteries.  In all, the masks are every bit as effective at hastening the onset of cyclicity in mares, but the mares can remain outside, in a field, negating the effort and cost of bringing mares into a stall or small paddock for artificial lighting programs.  A word of caution for any HBO Game of Throne fans...a bunch of horses in a field and in the dark looks like a pack of White Walkers coming at you with blue eyes.  It can get weird. 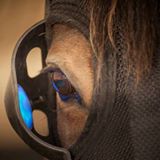 Additional Considerations
The lighting program is usually discontinued once the mare is cycling and ovulating regularly. Research suggests that a period of short days is required prior to entering a photo-stimulation period, so there is no advantage to starting your lighting program earlier than November and a year round lighting plan may actually be disadvantageous. In this respect, if the lights go out and the mare is subjected once again to short days (even for as few as 3 days), this may reset the system, so care must be taken to ensure the lighting regime is maintained. Research also suggests that ambient temperature may play a secondary role in seasonality, so mares in colder climates that are exposed to lengthening daylight may start cycling later than mares similarly exposed in warmer climates. Remember, that not only does the lighting regime hasten the onset of the breeding season; it will also cause early shedding of the winter coat, so don’t forget to keep this in mind for those mares that spend all or part of their time outside and provide blanketing in colder climates if required.

Foaling Mares
Lighting programs also have an effect on your foaling mares. Research has shown that foaling mares, exposed to 16 hours of daylight during the last portion of their gestation, will foal on average 7-10 days prior to mares who are not exposed to lights. More importantly, if you plan on breeding the mare again following her foaling, a lighting program will help prevent her from entering a post-foaling anestrous period that would coincide with a natural anestrous period. If foaling mares are not exposed to a lighting program, a proportion may not cycle until March or April when the natural breeding season begins.

Lighting programs for mares are the most common method for advancing the breeding season. There is, however, extensive research for alternative methods that would not require 45-60 days of artificial light. Hormonal therapies using various forms of FSH, GnRH analogs, prolactin, or dopamine antagonists have been proposed and shown various degrees of success in stimulating a fertile estrus period during winter anestrus.   Some veterinarians advocate for CIDR use, which is an intra-vaginal use of hormones in late transition to help speed up a mare to cyclicity.  Speak with your veterinarian or call your local SBS affiliate for more information regarding these historical therapies and some potential new therapies that are promising.

A lighting program is a cheap and effective way to manage your mare’s seasonality, but remember that it doesn’t shorten the transitional period of the mare’s reproductive cycle, it just advances it forward in the calendar, so be sure to start the lighting regime 50-60 days before the date you would like to get your mare bred. Also, a good practice in reproductive management is to perform a pre-breeding exam on the first heat cycle of the year. If your aim is for a January foaling date, then lighting should commence in December. The efficiency of any lighting regime is subject to a number of factors, e.g. lack of sufficient lighting, interruption of lighting, significantly low ambient temperatures etc., and therefore must be well managed to be successful and may benefit from combination with hormonal therapy as well.

Breeding Soundness Exam of the Mare

Preparing Your Mare for Breeding