A Review of Reports for Reproductive Efficiency

Last month we discussed the importance of tracking measures of reproductive efficiency, as promised this month we review some of the reported literature on reproductive success in various commercial programs. This is not intended as an exhaustive review of all the available literature on the subject. Rather, we have used specific references to illustrate various concepts related to reports of equine fertility.

When reviewing reproductive efficiency data it is important to consider all the environmental and management variables that could influence the result. A study by Katila et al [1] reviewed 15yrs of data for Finnhorses (FH) and Standardbreds (SB) in Finnland. A total of 20,168 mares and 2,230 stallions were included in the study that spanned years 1991 to 2005. The data represented 69,180 breedings and 102,615 cycles. The overall foaling rate was 68% with a breed difference of 64% for FH and 71% for SB. One could infer from this data that Standardbreds were more fertile as a breed than Finnhorses. However, it is possible that management practices may explain the difference in foaling rates. The FH owners represent a more traditional horse owner; mares are probably more often owned and handled by amateurs who might not even sell their foals. The breeding and foal fees are lower for the FH which may also exert an effect on the efforts to get the mare in foal. Also natural mating was more commonly practiced for the FH than for the SB. Foaling rates after natural mating were lower than after on-site AI which was more common in the SB.

In an Australian study, the reproductive efficiency was compared between Thoroughbred and Standardbred (SB) horses, records from 1994-1995 were reviewed, representing 3163 mares and 4522 cycles. The TB mares were bred by natural cover, the SB mares by artificial insemination (AI). The pregnancy rate per cycle was significantly higher in TB (70%) than in SB (62%), so in addition to a breed difference one could make the conclusion that live cover was more effective than artificial insemination. However, in this case the seasonal pregnancy rates were the same (87 and 89% respectively). The difference was explained by SB farms being less likely to involve veterinarians in routine breeding farm management and the longer breeding season in the SB industry allowing compensation for the lower pregnancy rate per cycle [2].

Another example can be taken from the study of Morris and Allen [3], the pregnancy rate per cycle was 55% for barren mares and 61% for foaling mares, but the respective seasonal pregnancy rates were 92% and 86%, and foaling rates 89 and 81%. The barren mares look to be a more fertile population than the foaling mares. However, the barren mares in this case may represent valuable problem mares that receive more attention and benefit from intensive management and veterinary treatment. As you can see it is essential to understand all the factors that can influence the result when interpreting data, there are so many variables at play in the reproductive management of horses. In addition, as mentioned in our previous article Measuring Reproductive Efficiency, it is also important to ensure there are sufficient numbers of breedings represented in the data before making conclusions which could potentially influence management practices.

Given the ideal requirement of producing one foal per year from each Thoroughbred mare, tracking of reproductive efficiency is critical for stud farm managers. Therefore published data on reproductive efficiency is predominantly biased towards the Thoroughbred breeding industry where mares are bred by natural service. The data from a number of studies is summarized in Table 1.

For comparison, the foaling rates (foals born/mare-yr) in three herds of feral Mustang horses in WY and MT from 2004-2008 [12] were 60% (n=153 mare-yr), 63% (n=129) and 75% (n=48). For feral ponies on Assateague Island National Seashore [13] the foaling rate was 57%. Mares less than 3yrs did not foal and the foaling rate of 3yr old mares was only 23%. The foaling rate for 4yr old mares was 46%, 5yr old mares 53% and 6yo mares 69%. The relatively poor production rate was believed to be a consequence of the stress of lactating while carrying a foal when forage quality is low. This is supported by the higher reproductive rate of 74% of feral ponies in the Chincoteague National Wildlife refuge on the southern part of the island. 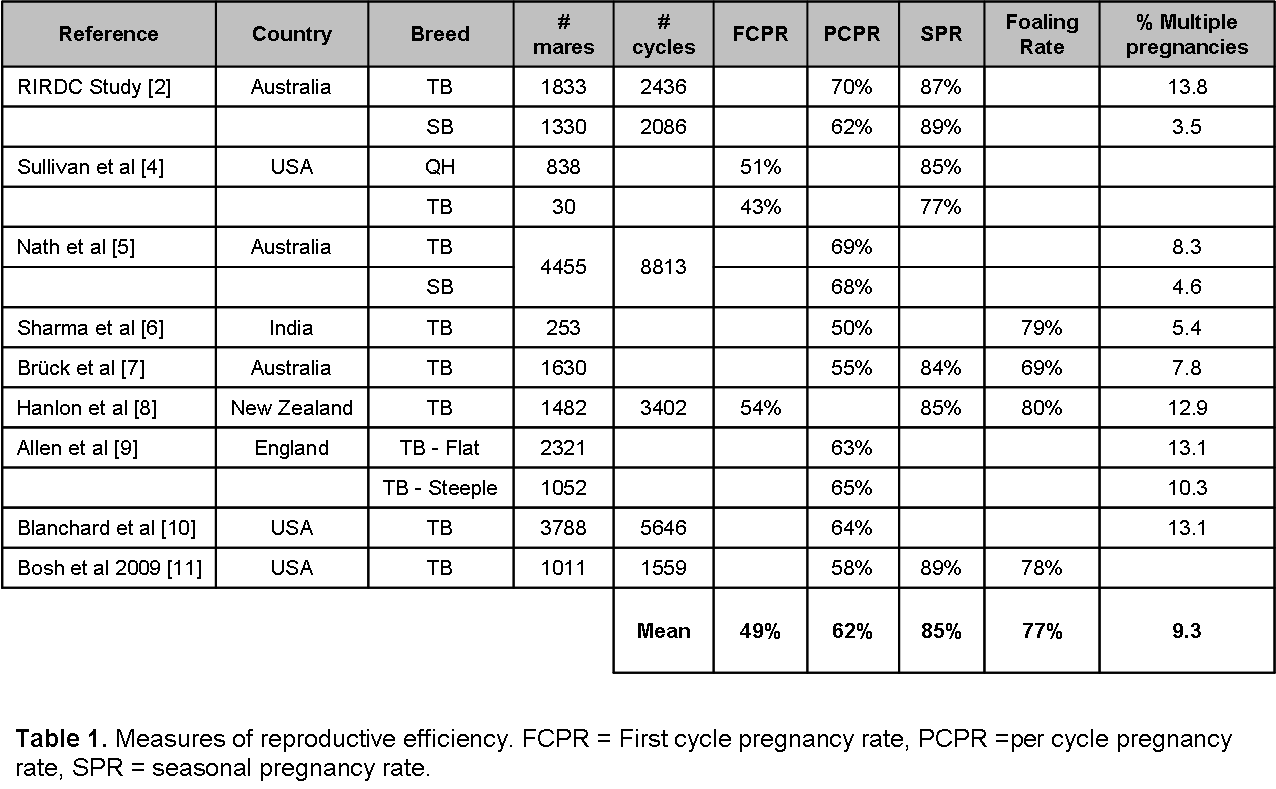 Twinning
The incidence of multiple pregnancies is also reported in Table 1. In the RIRDC study reported by McKinnon [2] the reduction of twin pregnancies to singletons by crushing one embryo was successful in the TB population, as only 10 of 245 twins (4.0%) were not detected as single pregnancies (i.e. they were lost) at day 25. An additional 3.5% were lost between 25 and 45 days. During the same period in 8 out of 46 SB twin pregnancies both embryos were lost (17.4%) at D25. This difference is believed to be related to fundamental management practices on the different breeding farms. Because the incidence of twins is recognized as low on SB farms, in general the first pregnancy test is delayed until the mare should have returned to estrus. This delay until day 17-20 can interfere with the ability to manipulate twins apart for a successful crush as fixation has occurred and twins together can be difficult to move apart for crushing. In the study of Brück et al [7] when twin pregnancies in Thoroughbred mares were reduced by crushing one embryo, 60% of pregnancies were maintained. The success of reducing twin pregnancies by crushing one embryo appears to be related to the time of detection and intervention.

We have already touched upon the fact that there are many factors that can influence the success of a breeding program. These variables have been further studied in artificial insemination programs and include the following: 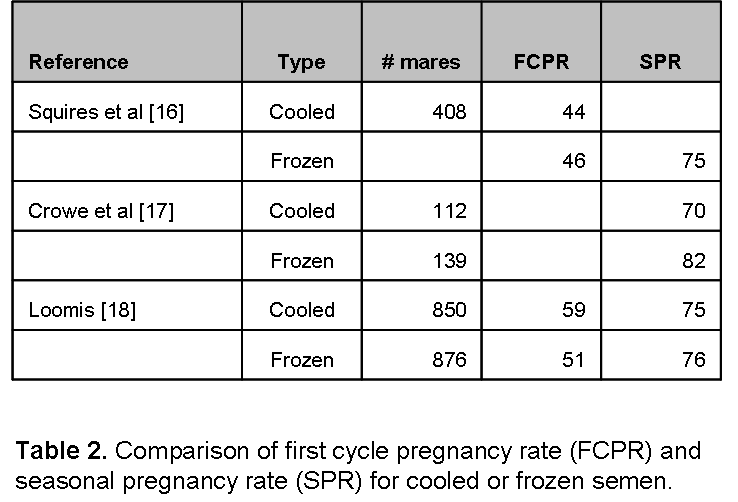 Breeding Method
In a Texas study [20] reviewing breeding records from 1203 matings to a total of 18 Quarter Horse stallions during the 2008 season it was reported that a mare bred on the farm with fresh semen had a two and a half times higher probability of becoming pregnant than a mare bred off-site with cooled-shipped semen. The dramatic decrease in fertility with shipped semen is likely due to management practices at the location where the semen is received, the on-farm mares were managed by experienced staff at a veterinary clinic on-site. A similar result was found by Rota et al [21] with the Maremmano breed in Italy, first cycle and seasonal pregnancy rates were higher for mares inseminated at an AI center (55 and 81% respectively), compared to mares inseminated at the breeder’s facilities (28 and 52% respectively).

Stallion
Understandably there can be incredible variation in the inherent fertility of an individual stallion. In a study population of 87 Thoroughbred stallions in New Zealand breeding by natural service [8] first cycle pregnancy rates varied from 38-74%. With frozen semen in the study of Barbacini et al [22] seasonal pregnancy rates across stallions varied from 40-93%.

Mare Status
In the study by Sullivan et al [4] with Thoroughbred mares bred by natural service, the seasonal pregnancy rate for maiden and foaling mares was 84% whereas it was 74% for barren mares. With frozen semen Loomis [25] reported a per cycle pregnancy rate of 58% for maiden and foaling mares, compared to 51% for barren mares and 44% for mares that had not been bred the previous season but had been pregnant in the last season they were bred. The tendency for maiden and foaling mares to have a higher conception rate than barren mares was supported by Barbacini et al [22]. However, mare status can also be influenced by age. In the study of Finnhorses and Standardbreds by Katila et al [1] foaling rates declined with increasing age in both breeds, but this was further compounded by the status of the mare. In mares aged 2 to 13yrs the rested and foaling mares were the most fertile, whereas barren mares displayed the lowest foaling rates. In the older mares (14-25yrs) the maidens were the least fertile, followed by the barren mares.

There are several studies comparing single to multiple inseminations with frozen semen, primarily to answer the commonly asked question of whether to inseminate with one dose of frozen semen within 6hrs of ovulation or to follow the timed insemination protocol utilizing two doses of frozen semen. This topic has been addressed in a previous blog article, The Pros and Cons of 1 or 2 Dose Insemination Protocols. Overall the pregnancy rates with one verses two doses of frozen semen are comparable. Interestingly there may also be an effect of age, in the study by Loomis [25], conception rates tended to be slightly higher in the younger mares (3-11yrs) when multiple inseminations were used (60% vs 50% for single) but for older mares (12-20yrs), conception rates were higher with single inseminations (58% vs 42% for multiple). 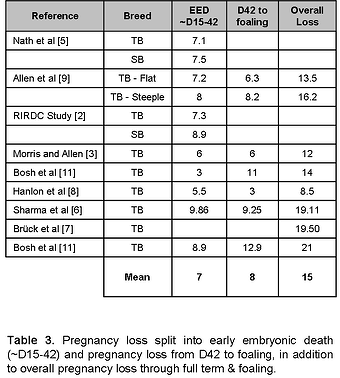 The reported incidence of pregnancy loss is summarized in Table 3, either as overall pregnancy loss for the season or split into early embryonic death and late pregnancy loss. In the study from India [6] pregnancy losses were significantly lower in mares aged 3-7yrs (15%) compared to mares aged ≥ 18yrs (46%) and early embryonic loss (D16-39) was reportedly greater for twin (22%) compared to singleton pregnancies (9%). The data presented in Table 3 is predominantly collected from studies of Thoroughbred populations bred by natural service. In a study by Christanelli et al, [27] when mares were inseminated with either fresh or frozen semen, the pregnancy loss rates were 12.5% with fresh semen and 16.7% with frozen semen. In the study by Barbacini et al [28], the embryonic loss rate of mares bred with frozen semen was 9.5%.

In conclusion, it can be difficult to provide guidelines for acceptable values of reproductive efficiency since there are so many variables that can come together to influence the end result. Nonetheless in a breeding program utilizing cooled or frozen semen first cycle pregnancy rates should be in the range of 40-60%, therefore mare owners should plan for a minimum of two cycles per pregnancy. Based upon the data presented in this review, end of season pregnancy rates should be around 70-85%, with foaling rates of 50-70%.