Posted by Meredith Bonnell, MS in Foal and Neonate Care

The mare-foal bond is a special connection that’s normally associated with the behavioral interactions between a mare and her foal. What’s not usually thought of is the bond formed between their immune systems and microbiomes. A healthy gut microbiome goes hand in hand with a strong immune system. Foals have innate immunity at birth, but several adaptive immune responses can take up to a year to develop to those of an adult horse. The correct development of a foal’s immune system is very important in protecting them from microbial pathogens and, in turn, gastrointestinal disease.

Horses have epitheliochorial placentation, which prevents the transfer of immunoglobulins from the mare to the fetus in utero. Therefore, a foal’s ingestion of colostrum is imperative before the foal is no longer able to absorb the immunoglobulins, maternal immune cells and cytokines from their dam and before the colostrum transitions to milk [1]. Colostrum is also very nutrient rich and decreases in nutrients throughout the first 24 hours following birth, which is another reason why timely ingestion of it is so important.

Mares not only share their immunity with their foal, but are also thought to affect their foal’s gut microbiome. A foal’s development of this microbial community in their gastrointestinal tract has been shown to be important in keeping them healthy. The proliferation of the wrong kinds of bacteria can cause serious illness and even death in foals. 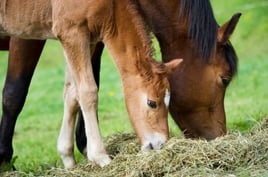 A few recent studies have looked into how the foal’s gut is colonized by bacteria before and after birth. A group of researchers sampled amniotic fluid, mare feces and colostrum in order to compare it to foal meconium [2]. They found that foal meconium shared bacterial species with amniotic fluid, mare feces and colostrum. The group suggested that this may be due to two different processes that have been shown in humans. Their theory was that the mare’s dendritic cells took bacteria from their gut and transferred it to their amniotic fluid or to their mammary glands during late pregnancy via their bloodstream [3, 4]. In humans, this process has been hypothesized to help the neonate adapt outside of their mother by starting their gut bacterial colonization in the womb. This colonization is also known to jumpstart the development of important immune system tissue in the gut.

The transfer of bacteria from the mare’s gut to her mammary glands would explain the similarities in bacteria between colostrum, foal meconium and mare feces while the similarities in bacteria between amniotic fluid, mare feces and foal meconium could be due to bacteria being transported to the amnion. However, more research needs to be conducted in order to determine the actual processes taking place since humans and horses have huge differences in their types of placentation and transfer of immunity from mom to baby. If these theories are proven to be true, then this may indicate that the health of a mare’s gut microbiome affects her foal a lot more than previously thought.

Even before birth, the colonization of a foal’s gut is an important step in their development. New knowledge about the effect of a mare’s microbiome on their foal in utero may give rise to new ways in which we can support a healthy foal. Since mares aren’t able to transfer antibodies to their foal in utero, it’s very interesting that it might be possible for their immune system to transfer bacteria to them. This could be a process that has adapted in the horse to stimulate the development of important immune system tissues in the foal before birth and to better prepare them for life outside of the womb.

You may also be interested in the following article: