High Prevalence of Latent Endometritis in Problem Mares: Effect of Activation and Treatment on Fertility

Posted by MR Petersen and AM Bojesen in Mare Management

Beta-hemolytic Streptococcus equi subsp. zooepidemicus (BHS) is the most frequently isolated pathogen in the uterus of mares. However, in a large fraction (>50%) of subfertile mares there is no obvious reason identified. We recently demonstrated that BHS have the ability to reside deep in endometrium and may also gain intracellular access. The ability to escape and hide from the immune system allows BHS to cause long lasting, hardly detectable infections. In addition to this, we have shown that BHS are able to enter a dormant state where the bacteria can slow down their metabolism. Most antibiotics inhibit bacterial growth by disrupting the microbial metabolism which makes the dormant bacteria highly tolerant to antibiotics.

A new bacterial growth medium for in vivo use has been developed to challenge the dormant BHS. The growth medium, bActivate, is put into the uterus to specifically turn dormant BHS into actively growing bacteria. This allows diagnosis of the latent endometritis, but more importantly enables effective antimicrobial clearance.

To assess the effect of latent infections on fertility, activation was introduced as a diagnostic aid during preparation of barren problem mares for breeding at a well-managed Irish thoroughbred stud farm during the breeding seasons 2015 and 2016.

During early estrus, the uterus was infused with bActivate. After 24 and 48 hours, diagnostic sampling using small volume lavage was performed to assess for the presence of bacteria. Following the introduction of bActivate, growth of S. zooepidemicus was identified in 16 (84%) mares. The mares that cultured positive were treated with uterine lavage and antibiotics for three days in combination with systemic administration of antibiotic for five days. After treatment, 18 of the original 19 selected mares were bred. 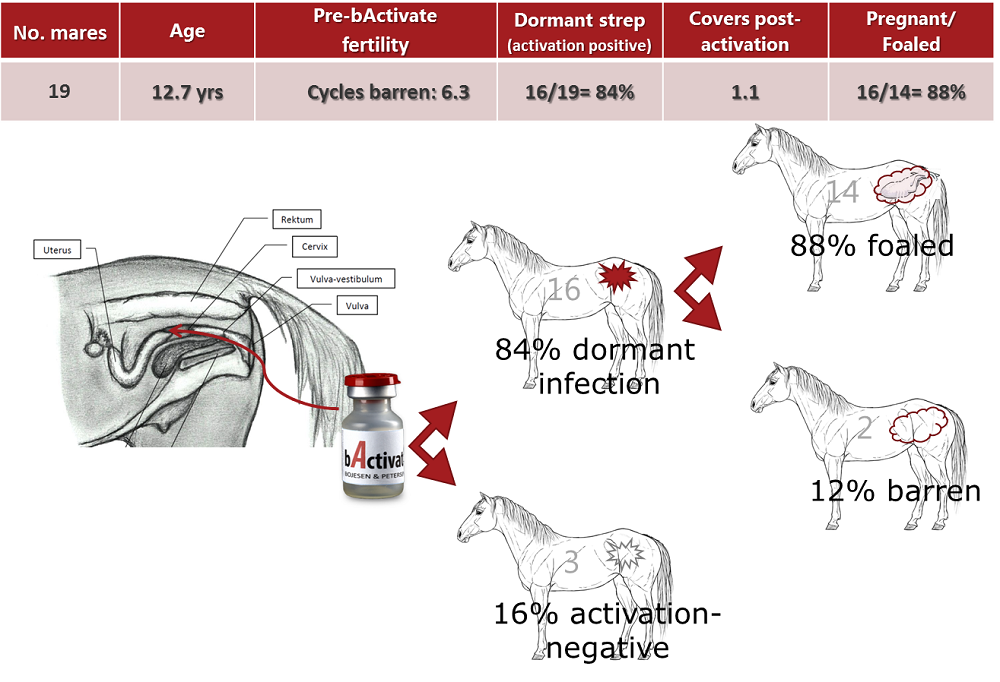 Fertility data has previously been compiled at the same stud farm, including records of 888 barren/slipped/rested mares. The pregnancy rate per cycle and the fetal loss rate in this group was 61% and 19.3%, respectively. Despite inclusion of barren mares only in the current investigation and thus exclusion of slipped and rested mares, which likely have an expected higher fertility, the per cycle pregnancy rate were higher in the current treated mares (70%) compared to previously obtained data (61%). The fetal loss rate was lower (13%) compared to earlier where 19% of the mares lost their pregnancies. While a randomized trial including activation or not would have been ideal, this has not been possible in a commercial clinical setting.

Activation of bacterial growth was induced and cleared in 84% of the included mares. Pregnancy was established in 16/18 (89%) bActivate-treated mares using on average 1.1 breeding cycles, while previous routine management and treatment of the same mares did not result in any pregnancies despite breeding for an average of 6.3 cycles per mare. The data suggests that activation and clearance of latent bacterial endometritis likely can increase the pregnancy rate per cycle and lower the fetal loss in problem mares.

bActivate is a growth media specifically designed to activate dormant streptococci in the uterine lining of the mare enabling diagnosis and treatment. bActivate was discovered by Professor Miki Bojesen and Morten Petersen, who founded Bojesen and Petersen Biotech, the company which produce and sell bActivate. The goal of Bojesen and Petersen Biotech is to decrease the negative impact of latent endometritis in the mare for the benefit of horses and humans. For more information or to purchase bActivate, please visit www.bactivate.eu, alternatively contact@bactivate.eu or (+45) 60712169 (Dr. Morten Petersen).

[2] Nielsen JM, Zent W, Petersen MR, Bojesen AM, Lehn-Jensen H, Troedsson MHT. Diagnosis of endometritis in the mare based on bacteriological and cytological examinations of the endometrium. Comparison of results obtained by swabs and biopsies. Journal of Equine Veterinary Science. 2010, 30, 27-30.