Intrafollicular Oocyte Transfer in the Mare 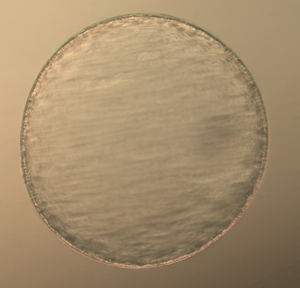 In the equine breeding industry, many different assisted reproduction techniques (ARTs) are widely used to aid the management of equine reproduction. ARTs provide options to owners looking to obtain embryos from genetically valuable mares and/or stallions for whom conventional breeding management strategies are insufficient. This article provides a concise summary of several common ARTs, as well as information regarding innovative techniques just entering clinical use.

The most commonly utilized ART is “embryo recovery and transfer” (ET). In conventional embryo recovery, an embryo produced in one mare (the donor) is collected and transferred to another mare (the recipient) for gestation and delivery. This may be performed in instances in which a donor mare is unable to carry a developing foal to term, either for medical reasons or performance concerns. Donor mares typically produce one embryo, which can be collected and transferred to a recipient mare immediately or cryopreserved for future transfer at a later time. In rare instances, more than one embryo may be recovered from a donor mare if double ovulation occurs. For optimal results, a potential donor mare should be in good reproductive health and be inseminated with semen of adequate quality to maximize the likelihood of yielding a viable embryo.

Another common ART that has become increasingly popular is “transvaginal follicle aspiration for oocyte recovery” (TVA) in combination with “intracytoplasmic sperm injection” (ICSI). Originally pioneered to produce embryos and ultimately foals from mares suffering certain types of subfertility, as well as from stallions with limited or poor-quality semen, TVA/ICSI is now additionally being used in the management of mares and stallions with normal fertility due to its enhanced efficiency and more straightforward implementation on the part of the mare’s owner.

For convenience, donor mares can undergo TVA’s as long as they have an adequate number of follicles on their ovaries for the aspiration session. These mares may undergo multiple TVA sessions throughout the year with at least two-week intervals between each session to allow for follicular development; and, while the donor mare should be closely monitored post-aspiration for any complications, the horse can return to competition/training, being an embryo donor for ET, etc., in between sessions.

Furthermore, it is possible to obtain multiple embryos from one TVA session, with oocytes from a fertile donor mare and semen of good quality from a fertile stallion. However, although it can ultimately result in enhanced embryo production, a significant limitation of TVA/ICSI is that the oocytes recovered from the donor mare must be transported to a center capable of performing ICSI. While ICSI is effective for efficient embryo production from isolated oocytes, it requires expensive equipment and extensive training and is available only in certain locations. 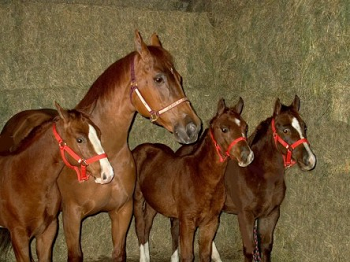 Intrafollicular oocyte transfer (IFOT) is a potential alternative to repeated embryo flushes from donor mares with conventional ET or to repeated TVA/ICSI sessions. IFOT would allow for embryo production from isolated oocytes from a donor mare with minimal basic laboratory handling techniques; however, this technique is currently not widely available clinically.

To perform IFOT, oocytes are collected from immature follicles from a donor mare by TVA and then transferred via a rapid, low-risk transvaginal procedure into the dominant follicle of a host mare. After IFOT, the host mare is inseminated, and a uterine flush for embryo recovery is later performed. Unlike in TVA/ICSI where isolated oocytes are cultured in vitro, and the mature oocytes are then subjected to ICSI, IFOT-oocytes mature within the host mare’s follicle and are fertilized in the host mare’s oviduct, creating an in vivo embryo production system. Ideally, when the uterine flush is performed on the host mare, multiple embryos are recovered, although minimally one embryo is highly likely to be recovered from the host mare. The embryos recovered from a host mare after IFOT can be biopsied to determine parentage before transfer5, or the foals could be parentage-tested at birth. Recovered embryos can be immediately transferred to recipient mares or be vitrified for future transfer.

Despite the scientific and clinical potential of IFOT, few substantial reports are currently available regarding this technique.1-4 While several excellent results have been reported (e.g., 6 embryos resulting from 15 transferred oocytes1; 5 embryos resulting from 9 oocytes4), the procedure has had limited reproducibility to date. While the underlying reason(s) as to why this procedure does not yield excess embryos every time remains unclear, overall embryo production per transferred oocyte approaches that of embryo development after TVA/ICSI.4

IFOT still requires further research to improve its efficiency. It is therefore important to maintain realistic expectations, as the transfer may potentially yield no embryos from the donor mare or no embryos from either the donor or host mare. However, recent research has shown that embryo recovery from the host mare is essentially normal, with embryos (genetically from the host mare, from the donor mare, or from both) being recovered from 65% of host mares after IFOT.4 In other words, even if embryos are ultimately not produced from the transferred donor mare oocytes, an embryo is still likely to be produced from the oocytes of the host mare. Thus, the use of a host mare whose embryo by the selected stallion is also valuable increases the clinical utility of IFOT in the equine breeding industry. By having both valuable donor and host mares, any potential embryo recovered would be desirable to the owner.

Overall, when using semen of good quality, IFOT offers a valuable method for the production of embryos from mares suffering damage to the reproductive tract that precludes conception or early embryonic development. IFOT further provides a method for the efficient production of multiple embryos in a single approach as an alternative to the repeated uterine flushes required for embryo recovery or TVA/ICSI. In cases where ICSI is cost-prohibitive or unavailable, IFOT can be utilized as another means to develop embryos from a desirable donor mare, especially as the procedure continues to be refined to improve efficiency and repeatability. Once clinically available, IFOT can potentially be performed in any practice with the capacity to perform TVA.