What Can Cause a Mare to Lose Her Pregnancy? 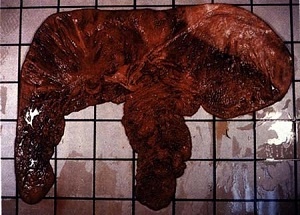 Mares can develop problems during pregnancy or be at high risk of losing the pregnancy for a variety of reasons. These include age (old mares frequently have endometriosis in which the uterus is unable to properly supply the fetus with appropriate blood supply and nutrients), physical conditions (placental and fetal fluid abnormalities; body wall tears; chronic debilitating conditions such as laminitis and Cushing’s disease), and acute disease or injury (placentitis, uterine torsion, surgical colic, colitis, acute laminitis, or fractures). When a mare becomes stressed or debilitated, inflammatory chemicals and prostaglandins increase and induce abnormal uterine contractions and potential pregnancy loss. Reproductive problems that arise during gestation, however, when detected and diagnosed early, can still result in the survival of the mare and usually the foal. The abnormalities most commonly seen during the middle to late stages of pregnancy will be discussed in this article.

Uterine torsion is an infrequent complication of pregnancy, reported in 5% to 10% of all mares that have serious equine obstetric problems. Uterine torsion occurs in middle to late gestation and causes great risk to both mare and foal. The cause is unknown, although it has been postulated that uterine torsion may develop secondary to rolling as a result of gastrointestinal problems or trauma, or the righting reflexes and vigorous movements of the fetus, during the later stages of gestation. Severity of signs is dependent on degree of rotation, level of vascular or fetal compromise, and intestinal involvement. Torsion of the uterus greater than 360º interferes with blood flow to and from the uterus and can result in local oxygen deprivation, congestion, fetal death, and rupture of the uterus.

Physical examination can be within normal limits, with the problem evident only on rectal palpation of the broad ligaments transrectal and transabdominal ultrasonography can aid in assessment of uterine compromise by enabling determination of uterine wall thickness, placental integrity, vascular distension, fetal viability, and condition of the fetal fluid. If there is concern about intestinal involvement, abdominocentesis (a surgical puncture of the abdomen by a needle to withdraw fluid) may be performed to aid in determining the appropriate mode of replacement or prognosis.

Many methods have been used to correct uterine torsion in the mare. The most common are rolling the anesthetized mare and laparotomy via standing flank or ventral midline incision. Once the uterine position has been corrected, continued monitoring of the mare (for systemic compromise such as laminitis) and monitoring of fetal viability, blood progesterone and estrogens, placental edema and separation are essential to provide a realistic prognosis.

Hydroallantois (a sudden increase in the volume of allantoic fluid during a period of 10 to 14 days) is more common than hydroamnios (an excessive accumulation of amniotic fluid in the amniotic cavity). Hydroamnios, unlike hydroallantois, develops gradually over several weeks to months during the second half of gestation. It is often associated with a deformed fetus with a facial, genetic, or congenital abnormality. The pathophysiology of hydroallantois in the mare remains unknown. Some authors have suggested that the increase in fluid is a placental problem caused either by increased production of fluid or decreased transplacental absorption. Others have proposed that the cause is related to placentitis and heritability.

In both hydroallantois and hydroamnios, mares present with abnormally increased abdominal distension for the duration of gestation. Mares in advanced stages of hydropic conditions may have evidence of ventral abdominal wall herniation or prepubic tendon rupture. Early management is aimed at preventing these body wall tears, which improves the mare’s prognosis, since obtaining a live foal has not been reported with hydroallantois and has been reported only once with hydroamnios.

Rectal palpation is diagnostic and reveals a huge, taut, fluid-filled uterus. The fetus cannot be balloted, and the uterus is usually tightly distended. Trans-rectal ultrasound reveals an excessive volume of hyperechogenic fluid. Differentiation between an increase in allantoic verses amniotic fluid can sometimes be difficult. Trans-abdominal ultrasound will confirm the presence of excessive volumes of fluid and help differentiate between the two cavities as well as permit evaluation of fetal viability. Ultrasonography of the abdominal walls for evidence of edema or separation of musculature is necessary to monitor impending body wall tears, especially prepubic tendon rupture, which is a common sequela with hydroallantois and can dramatically change the prognosis for the livelihood and reproductive ability of the mare. Mares with profound abdominal enlargement and large volumes of fluid in the uterus require controlled drainage of the fluid before delivery of the fetus. Controlled drainage is essential because of the alteration of total body fluid balance and venous return to the right heart. Sudden loss of this large volume of fluid may result in shock. Supportive care includes abdominal support (via placement of an abdominal wrap), IV fluids, broad-spectrum antimicrobials, and anti-inflammatories. Depending on the clinician, management of mares in which fetal viability is not realistic includes inducing parturition or allowing natural expulsion. Close monitoring for impending parturition is necessary, for these mares may have poor cervical dilation and uterine contractility (inertia) as a result of the chronic uterine stretching and may require assistance with delivery. Malpositioning and malpresentations are common. Unfortunately, the fetus can usually not be saved, but prompt intervention yields the best prognosis for physical recovery for the mare as well as for future fertility. Conservative supportive management of mares with hydroamnios can result in the birth of a live foal.

Two types of body wall tears occur in the late term pregnant mare: abdominal wall hernias and prepubic tendon tears or rupture. These injuries are seen in inactive or older mares that lack muscle tone. Abdominal wall hernias manifest with clinical signs of colic; mares do not strongly resist walking, have progressive abdominal distension, and develop ventral edema. In contrast, mares with prepubic tendon rupture have significant abdominal pain, progressive ventral body wall edema, stretched mammary glands, and elevation of the tailhead and ischial tuberosity (resulting in a sawhorse-like stance) and resist walking. Potential predisposing factors to body wall defects cited in the literature include hydrops allantois, hydrops amnion, traumatic injury, twins, and fetal giants. Past treatment options have included induction of parturition to help decrease the weight on the floor of the abdomen and prevent additional tearing from excessive weight of the fetus; application of a belly band to provide abdominal support for the pendulous abdomen; or prosthetic repair once the acute stage of abdominal wall breakdown has passed. In a recent study, the effect of various management strategies was assessed on the outcome of mares and their foals.  No difference in mare survival was detected on the basis of type of management, type of body wall defect, or presence of hydrops. Foal survival was significantly better in the conservatively managed group, compared with mare managed by interventional management, and was better without hydrops. Close observation for impending parturition is important, because assistance with foaling is likely to be necessary. Because these abdominal defects are not resolved postpartum, recommendations should be made that the mare not carry future pregnancies to term. In breeds in which use of assisted reproductive techniques is acceptable, mares could serve as embryo donors and remain reproductively useful.

Hemorrhage from the middle uterine, external iliac, utero-ovarian, and vaginal arteries has been described in late pregnancy and after parturition and accounts for 40% of peripaturient deaths in mares. Most cases occur in older mares that have had many foals. Mares with discomfort or colic in the middle or late stages of gestation or 24-72 hours after parturition should be considered to be potential hemorrhage candidates. The cause for rupture has not been definitively identified.

Three clinical scenarios can occur. In the first, the hemorrhage is confined to the broad ligament. The second scenario occurs when the mare hemorrhages into the uterus. This is usually a postpartum event, unless there has been traumatic injury to the uterus. Finally, the most detrimental scenario is seen with rupture of the broad ligament and extension of hemorrhage into the abdomen. When this occurs, the only reason for containment is the abdomen itself, which is not as conducive to clot formation. Mares with this complication often die quickly without intensive support for hemorrhagic shock.

Diagnosis can often be made on the basis of clinical signs alone. However, it is necessary to determine the extent of hemorrhage so that optimum treatment and prognosis can be established. Transabdominal ultrasound, helps to differentiate the swirling of active hemorrhage free in the abdomen from intrauterine bleeding or bleeding within the broad ligament. The optimum treatment has not been found, and many protocols have been reported. The most important initial consideration is to improve blood flow to vital organs and keep the mare quiet and warm to promote clot formation. When hemorrhage is prior to parturition fetal monitoring is important since poor blood flow leads to decreased oxygen to the fetus, fetal stress and death. Pregnant mares may need supplemental oxygen in addition to supportive care. 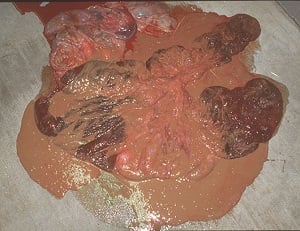 Placentitis, inflammation or infection of the placenta, has emerged as a leading cause of equine reproductive and economic loss. The top photo is of ascending placentitis originating at the cervical star whereas the photo to the right is of nocardioform placentitis with mucoid exudate and avillus area at the bifurcation of the uterus. In addition to inducing premature delivery, chronic placentitis may accelerate fetal maturation, resulting in the birth of precociously mature foals. Bacterial placentitis is most commonly caused by Streptococcus spp, which can be isolated and identified from the placenta and the aborted fetus. Other organisms identified are; Escherichia coli, Pseudomonas spp., Klebsiella spp., Staphylococcus spp., Nocardioform Actinomycetes, and Leptospirosis spp. The most common fungus isolated is aspergullus. For information on how these organisms gain access to the placenta and therefore the fetus, diagnosis and treatment see our article, Placentitis in the Mare – Causes, Diagnosis and Treatment.

Pregnant mares that undergo gastrointestinal colic episodes or surgery as a consequence should be classified as a high risk pregnancy. Prognosis depends on gestational stage and severity. Monitoring of the placenta is imperative post colic since prostaglandins will produce uterine irritability as well as potential cardiovascular compromise due to endotoxins. Progesterone/ Progestin supplementation is imperative to maintain uterine quiescence. Antibiotic supplementation and cardiovascular aides may also be necessary depending on diagnosis and severity.

In mares that are considered high risk (those described above as well as others ie. Cervical incompetency/lacerations, poor reproductive conformation), monitoring of the uterus and its contents using trans-rectal and trans-abdominal ultrasonography, measurement of maternal serum progestagens, and total estrogens provide a means by which early detection of placental and fetal problems become apparent prior to clinical signs and fetal death. These diagnostic tools, in combination, enable identification and treatment of a problem early in the course of disease.