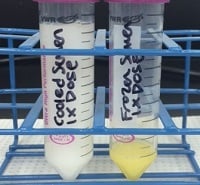 Breeders that are not used to thawing and inseminating mares with frozen semen are more likely to request cooled semen shipments. In addition, some stallion stations may not have an adequate number of dry shippers for shipment of frozen semen when it is requested.

Recently, two studies were conducted to determine whether the quality or fertility of frozen/ thawed semen that has been cooled for 24 hours is less than frozen semen inseminated immediately after thawing. Both of these studies were presented at the XII International Symposium on Equine Reproduction in Cambridge England in 2018 and published in the Journal of Equine Veterinary Science Vol 66: 2018. One of the studies was from Germany and the other from Colorado State University (CSU). In both studies, a laboratory test of semen quality was performed prior to a fertility study.

In the German study, semen was collected from 10 stallions and frozen using standard cryopreservation protocols. After storage in liquid nitrogen the semen was thawed at 37C for 30 seconds, diluted in a milk based extender, cooled to 5C and then stored for 24 hours. They saw only a slight decrease in sperm with intact membranes (0-4%) and a slight decrease in progressive motility (3-8% ) compared to samples analyzed immediately after thawing. This group of scientists also used the binding of equine sperm to porcine oocytes as another means of evaluating sperm function. They found that the frozen/thawed, cooled-stored sperm had increased binding to the porcine oocytes compared to controls. Fertility of mares in the frozen/thawed, cooled-storage group was similar to the control group (55 vs. 66%).

In the study conducted at CSU, 8 ejaculates were obtained from 5 stallions. Quality of sperm was compared between non-frozen samples cooled for 48 h and evaluated at 24 and 48 h compared to those frozen, thawed at 37C for 30 seconds or 12 seconds and then stored at 5C for 48 hours. Progressive motility was less for samples that were cooled and stored after freezing/thawing versus those only cooled (71% vs. about 45%). However, 45% progressive motility at 48 h is reasonable and similar to industry standards. In addition, 8 mares were bred for two cycles with frozen semen that had been stored cooled for 24 h after thawing and 9/16 (56%) became pregnant.

Although this procedure of thawing frozen semen, diluting the semen and storing cooled for 24 hr needs to be evaluated in a large field trial, the results of these two independent studies suggest that frozen stallion semen can be thawed then cooled to 5C and stored for 24 hr without an apparent significant decrease in semen quality and fertility. This procedure would allow stallion stations that have frozen semen in storage to accommodate their mare owners by shipping frozen/thawed, cooled semen in a passive cooling box similar to how cooled semen is handled. The success of such a procedure would likely depend upon the quality of the frozen semen and the inherent ability of sperm from individual stallions to withstand the stresses of cooling and should therefore be evaluated on a stallion before attempting to use commercially.

Additional articles regarding frozen semen include:

Is it Difficult to Thaw and Inseminate Mares with Frozen Semen?

Should Frozen-Thawed Semen Be Diluted Prior to Insemination?